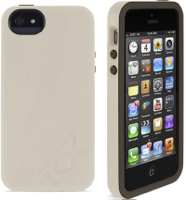 You buy an iPhone case for one or both of two reasons: style and protection. The NuGuard KX gives you a good amount of the former, and whole heaping of the latter. It’s a one piece design, with one color ringing the front and a second color covering the sides and rear, in eight combinations ranging from black on red to a Buzz Lightyear-evoking yellow on black. But this is no toy.

The case made of a rubberized material which, despite being no thicker or heavier than any other rubbery case, claims to be so strong that you can toss your KX-clad iPhone 5 as fiercely as you like, or even drop it from a death defying height, and it’ll be no worse for wear. I tried throwing it all around the house, and sure enough, my iPhone was no worse for wear.

As a case, the KX works well. I’ve tested too many one piece cases which were difficult to attach and especially to remove, but removing this case is as simple as pressing on a corner. The top and volume buttons are covered with press-through rubber, and they work well. The bottom cut outs are as protective as they can be without blocking anything.

Most highly protective iPhone 5 cases are bulky enough that they erase the thin and light nature of the iPhone 5 itself. But the NuGuard KX is one that I can recommend not just to those users who work in calamitous environments, but to all iPhone users have a little klutz in them.

Rating: five stars out of five