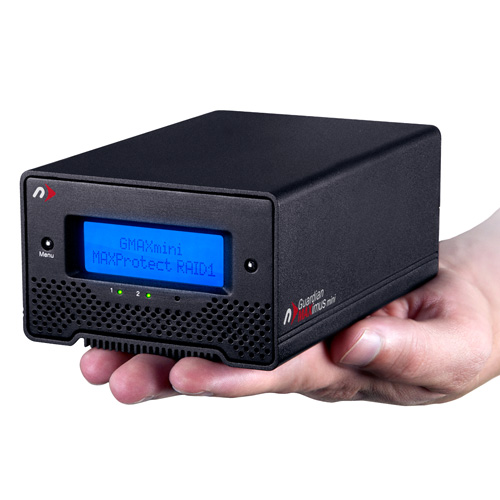 Data redundancy benefits with RAID are indisputable, but when you're on the road and you don't have the ability to access your NAS, a portable RAID like Newer technology's Guardian MAXimus mini Portable is a great option. The Guardian MAXimus Mini boasts a dual-bay portable system, created to be used with 2.5" hard drives or SSDs. Size-wise, it's about the size of 3 VCR tapes stacked on one another…pretty tiny for a portable RAID system, and the aluminum housing offers quad-interface and RAID1 or RAID0 setups. The MAXimus is powered by an Oxford Semiconductor OXUFS936DS FireWire400/800/USB2.0/eSATA to Dual SATA Controller that handles all of the essential functions.

With various interface options including FireWire 800/400, eSATA and USB 2.0 (all bus-powered), the Guardian MAXimus mini, with eSATA interface requires no power over the FireWire port. The company, howerver, does include a power adapter for those who want additional options. The MAXimus mini comes to you in RAID1 configuration, but it's easy to switch it to RAID0. RAID0 provides greater performance, and concentrates less on redundancy. The MAXimus mini comes in many pre-configured options including standard hard drives as well as high-speed SSDs. You can also purchase the mini without drives.

The Mini ships by default in RAID1, where the two drives are mirrored for redundancy. Most will probably stay in RAID1, but with a few button presses on the front of the unit, it's easy to transition to RAID0, if performance is more of a concern than redundancy. Newer Tech offers the Guardian MAXimus Mini in nearly a dozen pre-configured options including high-speed SSDs and standard hard drives. The unit is also available without drives, a nice touch for those who have drives already or have specific thoughts about which drives they'd like to use. 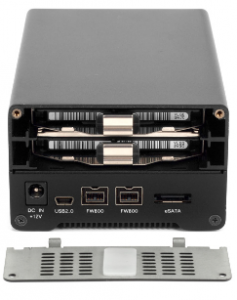 With performance and redundancy aspects as benchmarks, the MAXimus mini provides maximum Plug-and-Play Live Activity data backup and protection, and it writes the same information in real-time to create a mirrored copy of up to 750GB of data. If you want more performance, switching to the MAXPerform mode will give you up to 1.5TB of high speed performance storage. Whatever you prefer, Guardian MAXimus mini offers MAXimum performance, reliability and flexibility, and for critical data backup. With the Guardian MAXimus Mini over eSATA, FireWire 800 and USB, we saw great performance and speed, even with USB. Switching to RAID1, which we knew would cut the performance in half as compared to RAID0, both read and writes were speedy. 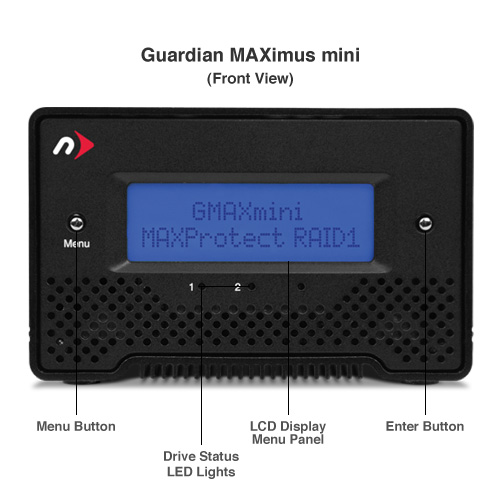 As mentioned, the MAXimus Mini's housing is brushed-aluminum, which provides a sturdy build and aesthetically it's sharp. The front of the unit features an illuminated LCD display, which displays drive info, RAID status and other pertinent information. A menu button sits to the left of the LCD panel where you can scroll through functions like backlight and alarm setup to RAID configuration. Below the display sit two drive indicators, labeled “1" and “2", with a third that illuminates when the RAID is rebuilding. Changing RAID modes takes no time. The back is where you can find the access panel for the drives and the interface array. This can be opened by unscrewing the panel, which will reveal interface cards, which you can easily slide out. 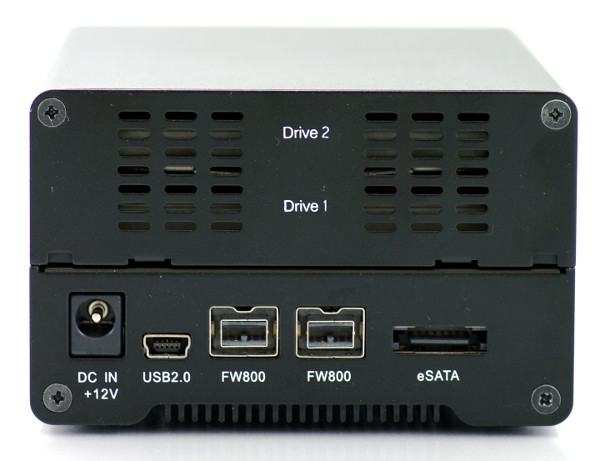 Newer Technology's Guardian MAXimus mini Portable RAID offers you great data integrity, a very small footprint and high performance. It's great for those who need quick working space outside of their laptop, or increased protection for files while mobile. And the fact that the Guardian MAXimus Mini needs no external power is a huge bonus. Performance is top-notch, it reads and writes at213MB/s with hard drives and its very well-built for rigorous mobile lifestyles. It's a winner

Check out the video demo by OWC and specs... Guardian MAXimus Mini Specs
The above article has been included on our site for archival purposes only.
To see the article as it appeared in the original published form, click the link provided.
All stories have been captured without modification to their content.