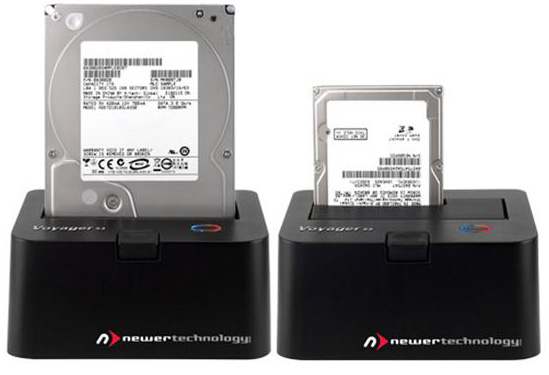 The NewerTech Voyager S3 USB 3.0 Drive Docking Solution definitely isn't going to be a product that everyone is going to find useful, but if you're anything like us, it'll prove to be a Godsend around your office or home computer setup. As most techy sorts will attest, old hard drives are the kind of things that seem to just stack up as the time goes by. Simply tossing them out in the garbage is never a particularly good idea, especially if you don't want to run the risk of someone getting hold of your personal information from the drive, but by the same note it's difficult to make good use of smaller capacity drives from years gone by.

Then there's the case of drives you replaced due to being unreliable. How many times have you swapped out a drive only to remember that there's something important on it you forgot to save to a new location? The rigmarole of powering down, opening up your commuter, hooking up the drive and rebooting can be a seriously painful one if you've to do it more than once or twice a year (and, unfortunately, it's something that we find we have to do all too regularly - which is mainly our own fault, but thankfully the Voyager S3 doesn't play the blame game), so having the ability to simply hook it up to this handy little docking station certainly makes our lives easier.

Truth be told, down through the years we've actually concocted a few DIY solutions to the problem, including cannibalizing old external hard drive chassis' for use as docks, but they've always tended to be messy, unreliable and too awkward to be as useful as we would have liked.

With the Voyager S3 it's simply a case of plugging the device into the mains, connecting the proprietary USB connection to your PC and tucking it away in the corner to be used whenever it's needed. If you've got USB 3.0 ports on your computer, you'll be able to make use of the blistering speeds offered by the protocol too, which can speed up any major backups you might be planning.

While our main use for the device has tended to be file salvaging over the few weeks we've been testing it, there are also a number of other uses. It makes cloning a hard drive a doddle, which is ideal for making master ghosts for your office installations (where applicable of course), and it'll also serve as a fine temporary storage measure if you find yourself in a bit of a bind.

In terms of setup there's literally none required, and even the least experienced of computer users will have no trouble finding their way around the unit. For Mac users it's completely compatible too, again making backup and storage a doddle - although it's worth noting that your Mac drive won't be viewable on a PC unless you've got the right type of file explorer installed. And even 2.5" laptop drives are compatible, making last ditch data salvage attempts easier than ever.

All in all the NewerTech Voyager S3 is a little gem of a device. Costing just $35USD new, it's something that all but the most casual of computer owners should have in their armoury. Even if you were only to use it a couple of times a year it'll pay for itself in no time at all thanks to its ease of use, versatility and, most importantly, incredibly competitive price point.