This Phone Case is Built for Action 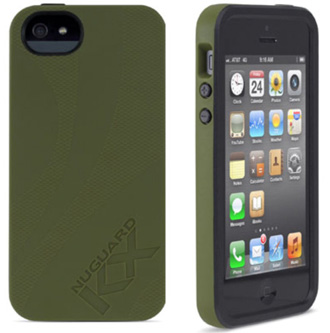 About a month ago I got my NuGuard KX iPhone case in the mail. Packaging was nice looking and easy to open, which is always good.

Now for the install...

Nothing is worse than the feeling of thinking your phone is going to break while putting on your case. It happens a lot with the heavy protection, one piece cases. The NuGuard KX though... easy peasey!! Smoothly installed and ready to protect.

The case is made of two materials. One, the most important part, the shell. It's a gel formed, shock absorbing material that is designed to take the impact of a drop and spread it throughout the case rather than the impact zone. That keeps the phone from taking a hard hit in a single spot that usually is the cause of a cracked screens and most damage.

The design of the shell is sexy. Slim, fits tight around the phone, comes in many colors, and what I like the best, actually, better than ANY other case that I've personally used, the way NewerTech molded the case to tightly fit around the ports. Gives it a lot of protection and looks really clean. I love that part! The second material used was a great design for the case. It's the micofiber liner. I HATE using a case only to pull the phone out and find it scratched and scuffed more than if I didn't have a case on it at all. The NuGuard KX is lined to gently wrap your phone in a soft liner that will keep it shiny and new! Great design inside and out.

Ok, I'll admit it... I researched the case a little bit before I tried these next few things. I had to, this is my daily user iPhone 5s I'm using here.

Test one, the drop test. I tried to be as "real life" as possible. I tossed the phone around inside my house, on the carpeted floor. Held up perfectly. Wasn't worried at all. Then, took it outside for another two scenarios. I got into my jeep, (sits up pretty high) set the cased phone in my lap, and hopped out letting the phone drop to the concreted driveway. I have to be honest... this one scarred me a bit. No harm, no foul though... Took it like a champ. Sure this one scuffed my case up a tiny bit but the phone was A-OK, and that's what matters!

The second scenario was simply for my own curiosity and satisfaction. Impressed with the protection and lack of damage the case shows, I decided to take the phone, squat down, and frisbee toss it down the street a few times. Knowing the impact wouldn't be that bad, I wanted to see if it scuffed the case up. To my joyous surprise it wasn't that bad. Sure there were scratches, and I know, I know, the phone's weight really isn't heavy enough to grind the case into the street, but, I'm not casing a brick here, the case is for the phone. With all that said, this is a really great phone case, and for about 35 bucks, it's a no-brainier.

The only Thing I didn't like that much was the opening around the camera. It was a bit large. Now, that being said, it needs to be to keep the pics clear, especially when you need the flash. I just hate seeing the color of the phone through the opening. Not a huge deal. It's way better to have the big opening with great pics, than a small one that looks cool, but effects the pic quality.

I think this is a great option for someone who values protection for their phone. I know they won me over as a customer.
The above article has been included on our site for archival purposes only.
To see the article as it appeared in the original published form, click the link provided.
All stories have been captured without modification to their content.