You can never have enough charging cables for your devices. That's just a given. If you've got one or more iOS devices, however, an iPhone, iPad or modern iPod, then picking up extras isn't quite as easy as grabbing that $2.99 cable at the gas station.

In this review, I examine a number of different Lightning charging and sync cables from three companies, NewerTech, ChargeTech and ZUS.

The reason that Apple's lightning cable is harder to obtain is because there's circuitry built into the cable itself to make sure that it works, that the connectors on the tab end are all in exactly the right position, and that the cable supports both orientations when inserted into a device. That's what vendors mean when they say that a lightning cable is "MFI Certified" or "Apple Certified": it means that they've included the tiny little lightning chip in the cable connector and that Apple's tested it and certifies it works.

By comparison, Mini USB and the more common MicroUSB connectors found on Android phones and many other devices have no smarts in them and require you to orient the cable properly when inserted or it not only won't work, it's likely to damage your connector port (as I learned to my dismay years ago with an early Dell tablet). Cheaper and easier to manufacture, but once you've used the orientation-free lightning connector, the MicroUSB fiddling can seem quite tedious.

So before we start, I limited my evaluation to cables that were Apple Certified, which means that they had this chip on the lightning connector end:

Bet ya never realized you had a tiny circuit board in your lightning connectors!

Perhaps the most useful of all the charging cables is from ChargeTech, the Keychain Cable:

The intention is for you to have this on a keychain, but instead, I just have this tucked into one of the pockets of my computer bag, a super useful emergency cable that you could also leave in your desk drawer or car glove compartment for when you're otherwise out of charging options. For $20, this is the one cable that'll never get tangled. Also available with MicroUSB if you'd prefer an Android-friendly option. All at ChargeTech.com

But that's kind of a bonus cable, because the real cable most people want is one that lets you use your device while it's plugged into a wall charger or computer, and for that, you'll want it at least a half-meter long or so for convenience. Then the question becomes one of the strength and reliability of the cable itself, because they age, fray, and wear out.

Enter the ZUS Kevlar lightning cable, currently on IndieGoGo thru late June, 2016. One cool thing: the cable has a lifetime warranty, which might not sound like that big a deal, but if you're like me and keep having to replace cables as they wear out, buy once, use forever sounds like one heck of a good deal. The ZUS units are under $20/cable and are 4-feet in length with a 90-degree USB connector: 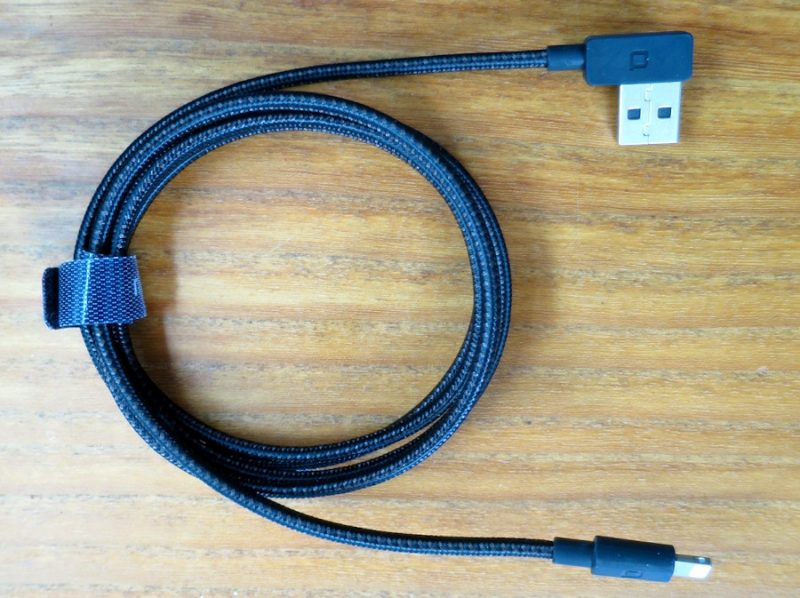 These are very nice cables, really tough and super durable, almost the opposite of the cheapo knock-off cable you'd pick up at the gas station or the checkout line impulse buy rack at the office supply store.

Here's a closeup so you can see the workmanship: 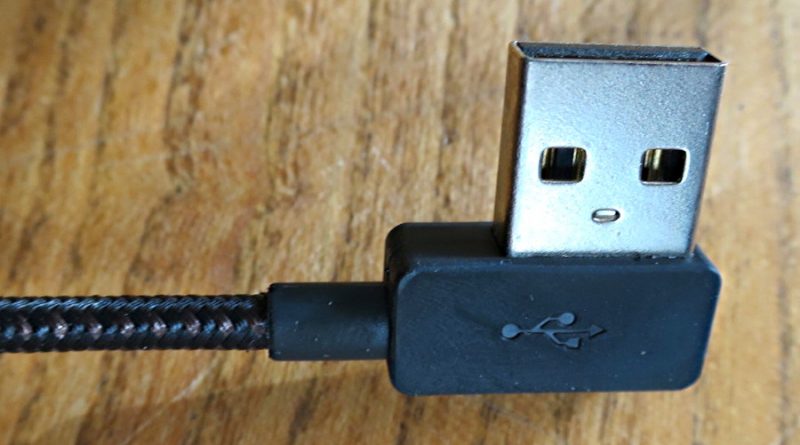 It's hard to explain how so many cables are poorly designed and shoddy until you get a chance to use one that's really well made, and just like other ZUS products we've reviewed, this one's really terrific. Oh, and it's so strong they say you can tow a car with it. I'm not gong to try because that's not really a criterion I use to evaluate charging cables, but in case I have to McGyver my way out of a tight spot, it's good to know!

Maybe you aren't looking for a tiny keychain cable or a Kevlar-reinforced supercable, just a couple of colorful lightning charge and sync cables for your children's iPad Mini, iPod and your husband's iPhone 5. That's where NewerTech has you covered, with its rainbow of Apple Certified cables in varying lengths and colors: 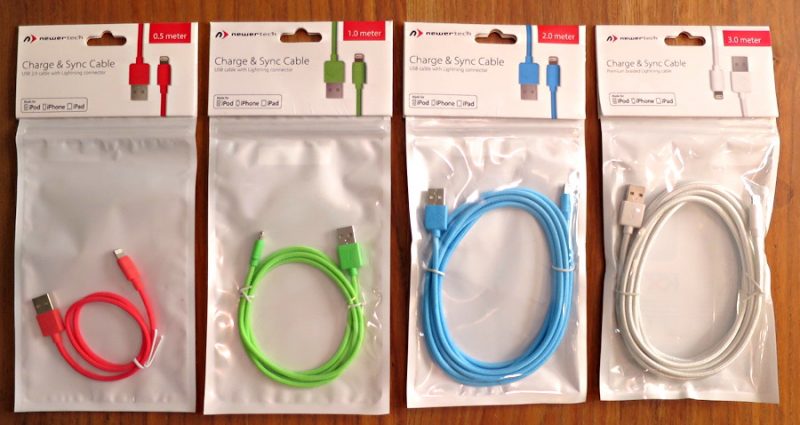 And, again, these are very well made cables, as this close-up shows:

Not sure that NewerTech would encourage owners to try towing a car with these particular cables, but the combination of bright colors and solid construction mark these as yet more cables that are going to last a long time and work well, whether they're for the clumsy fingers of a child or someone more careful with their gear.

Lots of great Apple certified lightning cables, ranging from a few inches to almost 10-feet in length. All recommended. And next time you need a cable, pay close attention to the certification and quality of workmanship. Because, rather surprisingly, there's quite a difference between a cable you can buy and use for years to come and one that's out of the bargain bin but fails three weeks later.
The above article has been included on our site for archival purposes only.
To see the article as it appeared in the original published form, click the link provided.
All stories have been captured without modification to their content.