As you may recall, in a column from a week or so ago I was waffling on about a new type of plug socket (see Power2U – What a jolly good idea!)

This rather cunning idea is brought to us from the folks at Newer Technology (www.newertech.com). Basically, it's a replacement for a wall-mounted power socket. In addition to the regular dual power connectors, this little beauty also boasts two USB connectors, each capable of charging anything up to an iPad.

When I first heard about this little scamp, I thought to myself "I know just where I could use one of those!" For reasons I've never been able to fathom, out of the countless power sockets scattered throughout our home, my wife (Gina the Gorgeous) and my 17-year-old son (Joseph) both insist on charging their iPhones and iPads using the socket on the end of one of our kitchen cabinets as shown below: 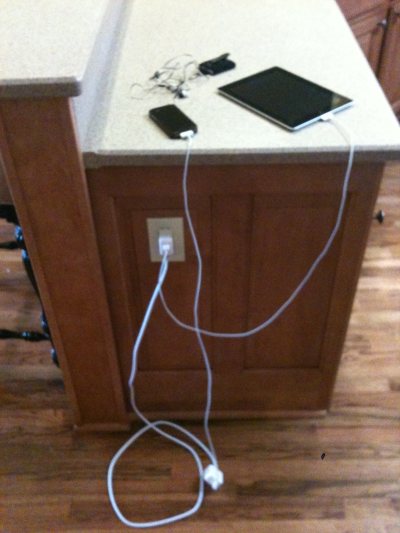 I find this a tad wearing on the nerves for a couple of reasons. First, because this means the main pathway into the kitchen is littered with cables. Second, because Joseph insists on dragging the ironing board out of the laundry room each evening to prepare his clothes for the following day, which means he plugs the iron into one of these sockets.

Almost invariably, Joseph unplugs his mother's iPhone, but he neglects to plug it back in again when he's finished, which means I end up being called the following day to hear the dreadful saga of the uncharged iPhone and what am I going to do about it and why can't I have a word with Joseph and … the minutes of my life pass before my eyes.

So you can only imagine my excitement when the nice folks at Newer Technology sent a Power2U to me to play with. Of course, nothing is as easy as you think it's going to be. When the Power2U arrived in my office, I was just heading out of the door to meet the heating, ventilation, and air conditioning (HVAC) guys, who were scheduled to perform some regular maintenance at the house, so I decided to take the Power2U with me and install it as a surprise for Gina and Joseph.

Thus it was that, while I was waiting for the HVAC guys to arrive, I popped the existing socket out of the side of the cabinet and disconnected all of the wires. Of course I should have turned off the power first, but "I R an Engineer" and I know what I'm doing (he said with a hollow laugh). Suffice it to say that when the doorbell rang and Henri the dog barked right behind me, the result was to give me an invigorating time.

Just to add to the fun and frivolity, I then found that the Power2U would not fit into the existing shallow box that was mounted in the cabinet. "Oh dear," I thought (or words to that effect). So I reconnected the wires and replaced the original socket, only to find that there was no longer any power coming out of it. This was not the surprise I was planning for Gina and Joseph…