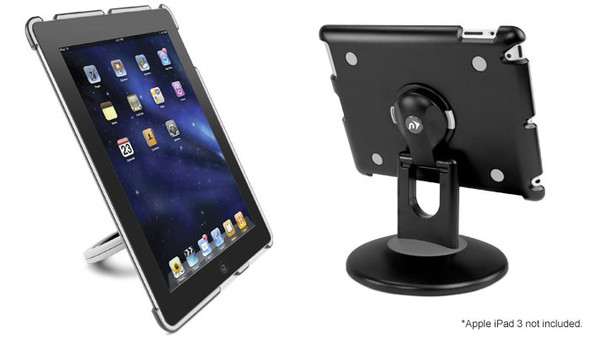 It's not surprising Newer Technology has come out with another great accessory for the iPad. Newer Technology has been an industry leader for Apple accessories, upgrades and enhancements for years and one of its newer additions to the impressive lineup is the remarkable NuGuard GripStand. Although it's been on the market for awhile, I am now just getting a chance to review and simply stated, it was well worth the wait.

Incredibly versatile, lightweight and equipped with a grip capable of rotating 360 degrees, the NuGuard GripStand can be used in a multitude of ways. In addition to acting as a hard plastic protective shell, it can be used as an iPad stand in either portrait or landscape orientation, a hand grip, carry case with handle and a hook so that an iPad can be displayed on a wall or even around the headrest of a car. This device can also be easily used with Apple's Smart Cover, adding even more protection for an iPad. GripStand currently comes in two versions – for iPad 3 and 4 (for this review) and for iPad 2. Both versions can also be bundled with Newer Technology's GripBase, transforming an iPad into an impressive looking desktop station.

In reviewing the GripStand3, I found the protective cover to fit snugly and firmly onto my iPad and the swivel grip moved smoothly in either direction, while locking into position when in portrait or landscape orientations. The grip can also be adjusted in a number of viewing angles to suit a user's preference when used as an iPad workstation. For transport, the handgrip serves like a briefcase handle and coupled with a Smart Cover, can serve to impress colleagues and friends with its super coolness factor. I especially liked the hook feature when used with the included strap to wrap around a headrest, allowing kids or other backseat riders to use an iPad hands free.

Personally, the handgrip is the most useful feature, as I use my iPad primarily for reading emails and several media-related apps. However after a while, the handle gets to be a little uncomfortable, yet just holding an iPad for an extended time gets uncomfortable anyways. The back of the retail box says the device “doubles as a highly effective one-hand-grip so you can use your iPad while standing or walking” and for those purposes, it works just fine. But just because it was a little uncomfortable for me doesn't mean the NuGuard GripStand isn't an outstandingly practical gadget, because it's unquestionably one of the most innovative multi-purpose stands I've sampled thus far. Moreover, the accompanying GripBase with its weighted support base and resembling a mini iMac, impresses even that much more.

With sales of tablet computers surging more than 142 percent from a year ago, consumer demand for iPad accessories such as NuGuard's GripStand3 will continue to be a hot item and in greater demand. I envision the stand and base as a nice iPad accessory for a classroom setting, as tablets are now everywhere, particulary in the academic environment. What makes the NuGuard GripStand/GripBase Bundle even more attractive is it's recent price drop via Newer Technology's parent website Other World Computing, with the iPad 2 version selling for just $27.50 and only $39 for the iPad 3 or 4.