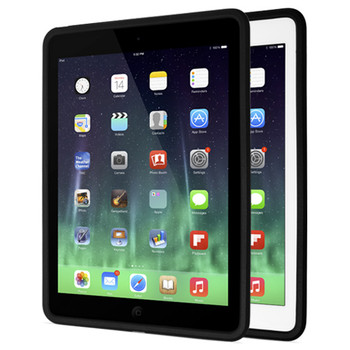 Earlier this year, the NuGuard KX, with its cutting edge "X-Orbing gel" technology, first caught my attention while attending the 2013 Consumer Electronics Show in Las Vegas and later at MacWorld San Francisco.

What made the NuGuard KX attractive was its ability to protect an iPhone from damage when accidentally dropped onto a hard surface, such as concrete. Later developed for the new iPhone 5S, the military-grade outer case is incredibly easy to slip on and its “hyper-advanced” X-Orbing tech is designed to absorb kinetic energy evenly, providing an iPhone with what appears to be the ultimate in smart device protection. Furthermore, the case isn’t bulky like a lot of the other smart phone cases featuring the now standard military grade protection.

The case was so well received at the 2013 Consumer Electronics Show, it received Beatweek's Best of Show Award and by September, won a prestigious Gold Stevie award in the New Product or Service of the Year at the 2013 American Business Awards in San Francisco.

The latest addition to this family of NuGuard KX cases for Apple devices, including the iPad and iPad Mini with Retina Display is of course, the NuGuard KX case for the iPad Air. Undergoing the same type of U.S. military standard drop tests utilized for previous NuGuard KX cases, Newer Technology uploaded a few videos on YouTube to demonstrate its remarkable ability to protect Apple’s latest and greatest, must-have smart device.

The videos currently found on You Tube feature a Newer Technology representative standing at the top of a concrete stairwell, before tossing an iPad Air protected by the NuGuard KX, down a flight of stairs, then settling onto an obviously hard concrete floor. Without switching to another video camera, the representative walks down to the iPad Air, powers it on and reveals no apparent damage whatsoever. I was convinced after the first viewing, but went ahead and viewed both stress tests several more times and encourage consumers to view these same videos.

The NuGuard KX Case for the iPad Air is a one piece, integrated hard shell with a soft inner core, allowing it to be easily wrapped in seconds around any of the new iPad Air models. Its molded casing also allows for protection and easy access to the iPad’s external ports and buttons.

At just $49, this case seems like a bargain given the amount of protection it provides for an expensive investment like the new iPad Air.

It will be a great gift for the holidays and can be purchased through the Newer Technology and Other World Computing websites.

Conclusion: Newer Technology’s NuGuard KX Case for the iPad Air is a solid two thumbs up and a five star rating for this review.
The above article has been included on our site for archival purposes only.
To see the article as it appeared in the original published form, click the link provided.
All stories have been captured without modification to their content.