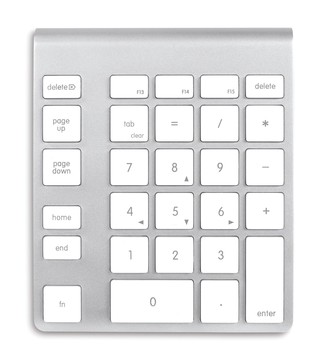 Describing Newertech's Wireless Aluminum Keypad is easy — it's the use that gains the attention. But let's start with what you see: an aluminum clad numeric keyboard encased in a shape that makes it look more like it was cut off from the side of an Apple wireless keyboard. Not that an Apple keyboard provide numeric keys at its side, which is where this wireless comes in. Place it next to the Apple keyboard, or any keyboard for that matter — although with Apple's you can use an included bracket to keep it in position and make its appearance on the scene seem a part of it all.

But first you've removed the slotted tab on the side and inserted 2 "AAA" batteries to power the Bluetooth tech. And mated it with the computer or laptop that's using the wireless keyboard: hence you now have a keyboard and a numeric keypad both working. But getting back to what you see — a set of numeric keys (obviously) but also useful ones to the left of the numbers, such as "delete" which is also repeated at the top of the keyboard. Other keys, such as for paging and function are to the left and above the number keys as well.

In use, you don't have to pound these keys, they have a nice polite "touch" to them, almost as if they were flat and conductive rather than mechanical. This echoes that of the Apple keyboard's keys and makes for a near-seamless transition between hitting a letter key or a numeric. The use of the bracket makes moving from one keyboard to the next a lot easier than if they were just placed side by side — but of course the keypad can be put anywhere you want to use it. The need will dictate the placement, seems the best response. I used it with the bracket because it was for spreadsheets where I found its value most useful.

Newertech's Wireless Aluminum Keypad does its a single job — providing numeric keys — in an efficient manner that also adds in good looks to match an Apple keyboard (white keys, that), a solid construction and cable-free connectivity (an obvious must if used with a mobile device). If you need numeric keys and work on a Mac (or a PC), this is a valued accessory to your fingers and well worth its $54.95 cost.
The above article has been included on our site for archival purposes only.
To see the article as it appeared in the original published form, click the link provided.
All stories have been captured without modification to their content.