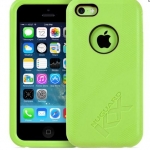 Nuguard KX for iPhone
Everybody drops their smart phone. I have a friend who will only buy feature phones because she's terrified of dropping and smashing an expensive smart phone. That's a little extreme, but I empathize. Back in the digital Neolithic age (2007), I cracked the screen and damaged the case of my iPhone 2G. After having to spend way too much to have it fixed and being forced into digital withdrawal for two weeks, I started the search for a case to protect my phone.

According to the Consumer Electronics Association (CEA), the market for iPhone accessories will total $2.3 billion by the end of this year. There's been a steady increase in the amount of money spent on accessories. The figure for 2012 was $1.8 billion. In 2013 it was $2.1 billion. With the increased penetration of smart phones and tablets and, dare I say it, Phablets, the need for accessories, especially cases is only going to increase. So the competition is fierce.

The competition has produced a dizzying number of third-party case manufacturers. The iPhone 6 hasn't even been released yet, but there are already dozens of cases available for pre-order. A search for iPhone cases on Amazon resulted in more than 20 screens full of results. 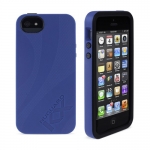 Front and back view of the Nuguard KX iPhone case
So I had to narrow my search criteria:
1. Protects the phone if dropped onto a hard surface from a reasonable height.
2. Fits comfortably in my pocket.
3. Water Resistant.
4. Choice of colors.
5. Cheap (no sense in mincing words).

Rats! Still too many results. So I cheated. I searched through my email for all the press releases I had received about iPhone cases. Reading through the specifications, I settled on the Nugard KX. The company claims that it has drop tested the case from 20 feet without damage to the phone. While they don't actually claim that the case meets military specifications (MILSPEC), they do say it was military drop tested.

One of the first cases I purchased, after my very first dropped iPhone disaster, was this fat rubberized thing. It worked well enough; if you define worked as not having a cracked case or smashed screen while I owned it. The drawback was that it was incredibly tough to get on and off the phone. It was like trying to take off a pair of gloves that were too tight, although the phone survived quite nicely. The rubber started hardening and flaking. I thought I'd better replace it before it peeled off altogether.

I didn't buy the next case. It was a Tchotchke, given to me by a vendor who was not in the case business. It was plastic, but it scored major coolness points for having a bottle opener on the back. I had planned to get rid of it, but you'd be surprised at how many bottles of beer that thing opened. And more importantly, it went through an entire contract cycle and some of the worst weather extremes in my lifetime and still did its job. Sadly, it's time for a new phone and this case was designed for an iPhone 4S. I'm going to miss that bottle opener.

According to the company that manufactures, the Nuguard KX, a thin layer of gel spreads the energy at the impact point, so the potential damage to the phone is minimized. Imagine falling onto a stack of foam mattresses. You don't get hurt, because the energy is soaked up by the mattresses. Because the layer of gel can be made very thin, the case itself adds very little to the exterior of the iPhone. The only way that I know my phone is nestled in the case is because it feels a little softer than the iPhone case itself. I'm not going to do a real torture test of the case. I no longer work for a giant corporation that would treat the replacement of my phone as a normal business expense, if everything went wrong. I'm testing it organically, which means, that I'm exercising normal care, but careful or not, the phone is going to hit the deck. 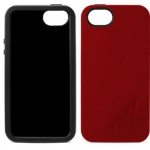 Inside and back view of the Nugard KX iPhone case
In the weeks that I have been testing the case, I brushed it off my nightstand onto our hardwood floor, elbowed it off my desk-about a four-foot drop, and it slipped from my jacket pocket when I was removing the garment to hang on the back of a chair. The worst drop took place in my local pub. No, I was stone cold sober. When I went to put the phone on the bar, with my bad eyesight, I put it too close to the edge. It fell from the bar, bounced off the brass rail, before hitting the tile floor. No damage to the phone or the screen. Oh, I forgot to mention that Nuguard sells a transparent screen guard with similar properties to the case. A nice feature of the screen protector is that it covers the front of the phone completely with just a cutout for the menu button.

The Nuguard KX case and screensaver vary in price depending on the online retailer. The combo should run you under $40. There are cases for the iPad and other smart phones and tablets.

Below is the link to the Nuguard KX YouTube video, and their crash tests, but, as they always warn you on the stunt videos, "don't try this at home, kids,"
The above article has been included on our site for archival purposes only.
To see the article as it appeared in the original published form, click the link provided.
All stories have been captured without modification to their content.