Desk lamps are not typically something in this Gadget Guy's repertoire or even on my list of tech gifts for under the tree but I was happy to make an exception for the NewerTech NuGreen energy efficient flexible neck LED desk lamp. 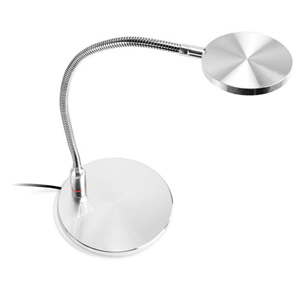 The first thing you'll notice is that it looks pretty cool. It has a flat aluminum base, a bendable 12-inch gooseneck, which allows you to position, it depending on where you need the light and an equally flat disc-shaped head that matches the lamp's base quite nicely.

What's even cooler is how it puts out the light. The lamp head features an impressive 50 5mm light emitting diodes (LEDs), producing a very bright (4500K) white light similar to what natural daylight would look like. This makes it ideal for almost any room in the house. It's not designed to light the whole room, but more in a concentrated area like a desk. Still, you wouldn't want to switch it on and looked directly at it, as it would be truly blinding. What's even more amazing is how energy-efficient it is. With all that light it puts out, it only consumes a mere 3.6 W total power and the LEDs remain cool to the touch.

According to the company, the LEDs are designed to last for up to 45,000 hours of use, which they say is up to 22 times longer than a traditional bulb. And they're eco-friendly too. They contain no mercury and therefore can also be recycled. 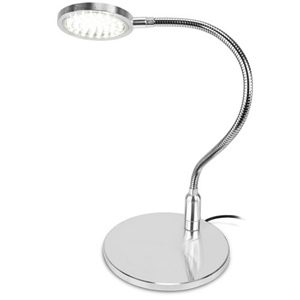 If you look closely, there's no visible power switch. Plug it in and a red ring illuminates at the end of the gooseneck at the base of the lamp. Simply touch the metal area below the ring and the lamp turns on. Touch it again and it powers off. At first I wondered about the red ring. If this is supposed to be an energy saving lamp and why is it burning energy? But then I quickly realized that it likely consumes very little power and makes the power switch easy to find in the middle of the night when everything is pitch dark instead of fumbling trying to find it.

The next thing I thought was that although this was a really nice bright lamp but no way to control its illumination. Strangely enough, I discovered, by accident, that if you touch and hold the power control while it's on, the lamp will dim; touch and hold it again and it brightens. This feature appears to be undocumented. A very valuable feature like, dimming should never be a well-kept secret.

And then there's the AC adapter. Not not sure if this was planned or not, but the lamp itself has a small power cord tail which the AC adapter plugs into and then into the wall. This feature can be particularly handy when for example you might be doing your cleaning or dusting and instead of having to unplug the lamp from an inconvenient power socket you simply disconnect the adapter from the tail of the lamp then reconnect when needed.

Overall, I was impressed with the NewerTech NuGreen Flexible Neck LED Desk Lamp. It looks good; I like the flexible gooseneck, the one touch power and of course the undocumented dimmer.

I'm still amazed as to how bright the light is considering it only consumes 3.6 W making it very light on the energy pocketbook. It's important to note, however, that the light it emits is more of a natural and daylight white light, which might not be ideal for someone who prefers a more softer or warmer light.

My only concern is that it doesn't appear that you can actually replace the LEDs. And while the LEDs themselves are usually quite solid and last for a long time, in the event of a power surge and the LEDs fail, you might have to replace the lamp.

Nevertheless, this cool lamp, pardon the pun, would make an ideal gift for use in your home or office. It retails for $69.99 U.S. and comes with a one-year warranty. It's not the cheapest lamp around, but you can find it at places like OWC or Amazon for a more reasonable $49.00 U.S.

Rating: 4.5/ 5
The above article has been included on our site for archival purposes only.
To see the article as it appeared in the original published form, click the link provided.
All stories have been captured without modification to their content.