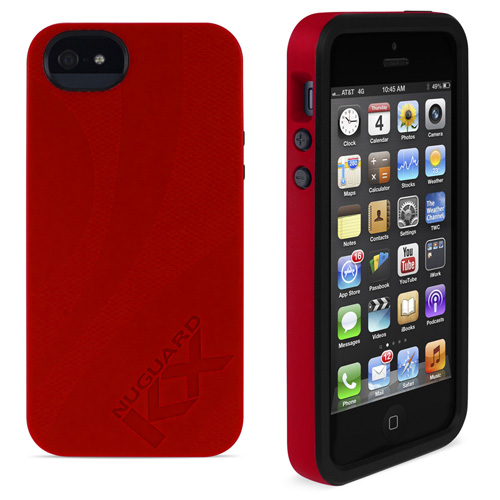 There are a lot of cases on the market for iPhones that protect them by surrounding them in thick metal, rubber, or both. These cases, while utilitarian to some degree, always add an ungodly amount of bulk to your once sleek and portable device. For many consumers, including myself, a huge bulky phone is too high of a price to pay for ultimate protection and peace of mind. Newer Technology is attempting to bridge the gap between inconveniently bulky protective cases and the sleeker, less protective ones that many opt for instead with their NuGuard KX Protective Case line for the iPhone 4, 4S, and 5. So is their new case as tough as nails or like nails on a chalkboard? Find out what we thought about our time with the NuGuard KX after the jump.

Not that it particularly matters, but the review unit I received was the black on black colour called "Darkness" instead of the Roulette Red colour shown above. I chose the red colour for the article header because it looks very sleek and shows the textures on the back of the case a bit more clearly. The NuGuard KX comes in a total of eight different colours, so if nothing else you know that you can get a colour you like.

Build quality-wise the NuGuard KX is quite impressive. The shell is basically rubbery plastic, but it's lined on the inside with slightly velvety "X-Orbing gel". This futuristic gel, at least according to the MIL-STD-810G U.S. Military Standard testing that was performed on these cases, is able to absorb any impact your iPhone is remotely likely to receive. There are also two waves of crosshatching along the back of the case that give you a bit of purchase when you hold it and a beveled edge that extends all the way around the front of the iPhone ensuring that the screen isn't the first thing to hit the ground should it be dropped.

Putting on and removing the case is a simple matter, but since it's all one piece there is no danger of it popping off accidentally. When it's on all of the ports, switches, speakers, etc. are accessible as is expected from any competent iPhone case, but in some cases they're too accessible.

When I put on the NuGuard KX for the first time and was inspecting it from varying angles I noticed the volume change indicator showing up on my iPhone's screen even though I hadn't consciously put my fingers anywhere near the volume buttons. Upon further testing, I found that the +/- button extensions built into the case make those buttons quite a bit more sensitive than they are without it, and you don't even have to press right on the buttons themselves to activate them. Pressing the area between the buttons on the case will randomly register as either a volume up or volume down, and pressing just above the + button also registers like a regular button press. Pressing below the – button, incidentally, didn't resolve in any unexpected button activation in my testing, but I hardly need to say that this shouldn't happen at all.

While the NuGuard KX does an admirable job of keeping its form factor down, it still clocks in at a good few millimetres thick and that's enough to prevent your iPhone from fitting into most iPhone/iPod docks without the assistance of a dock extender adapter which can run you another $6-$15 on top of the otherwise industry-standard price tag of $35. So, while it's definitely space age in thickness compared to its competitors, it's still a ways from not impeding with your iPhone's "un-becased" functionality. The build quality and protection that the NuGuard KX brings to the table are unmistakable, but whether or not the extra peace of mind is worth the sensitive buttons and need for a dock extender adapter is up to you to decide. If you're looking for the maximum amount of drop protection with a minimal amount of added bulk in an iPhone case, though, the NuGuard KX should certainly factor into your considerations. 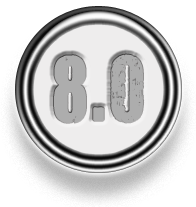