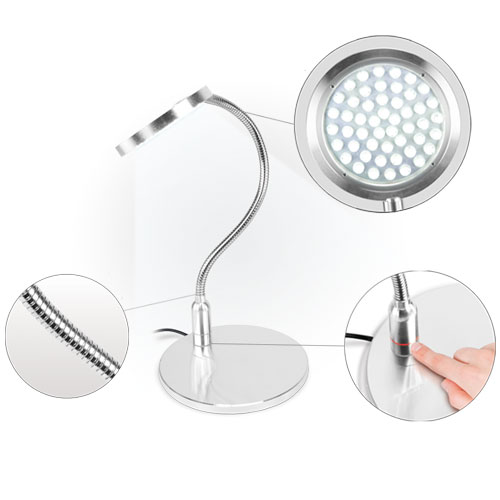 "What does a desk lamp have to do with gaming?", you may well ask. I will answer with another question, "Where do you keep your gaming computer?" Chances are that if you have a gaming PC tower it's going to be on (or under) a desk. Failing that, there should certainly be some part of some room in your home that at least occasionally needs to be illuminated beyond what light occurs there naturally. This is where the NuGreen LED Desk Lamp comes in. We'd been looking for a replacement for the old fashioned bankers lamp that had illuminated our PC gaming desk for quite some time and were intrigued when the NuGreen showed up on our doorstep. Was our time with the NuGreen illuminating or did it leave us in the dark? Read on to find out.

Specs-wise the NuGreen comes with a fairly impressive pedigree. It uses only 3.6 watts of power (compared to say, a 60 or 100 watt lightbulb) and its LEDs last for "up to 45,000 use hours", or roughly 22 lightbulb-lives worth of wear and tear. It has a very flexible goose neck that lets you position it in just about any way you can imagine, and it's activated in a fancy touch-activated manner by poking anywhere below the glowing red ring near the base. Considering the amount of real estate that the lamp offers for possible touch-sensitive areas, though, having only a one-inch ring at the bottom of the neck sensitive to touch feels like a missed opportunity.

Looks are all fine and good, but a lamp needs to... lamp well to be considered a good product. There are a total of 50 individual LEDs housed in the NuGreen's head, which is apparently recyclable once you've used your allotted 45,000 hours with it. The lamp's specs say that it gives off 1600-2200 mcd, which is not a lot, so I was initially worried at the amount of light the NuGreen would be able to produce. After using it, though, I have to say that while the light is a lot more directional than your average lamp, it is certainly more than enough to see your keyboard/snacks or read comfortably by. Since the NuGreen uses LEDs, it also gives off a much cooler white light than what you're probably used to coming out of a desk lamp. The closest comparison that I can make to the quality of the light is that it's quite similar to the light given off by Seasonal Affective Disorder lamps, and it may even be unofficially useful in much the same way. Essentially, compared to the 40w bankers lamp that we had in place before, the NuGreen gave off a different, but equally adequate amount of light.

While not necessarily a complaint, it's worth it to note that the NuGreen features an unusual power cord. Like many modern electronics, the power supply proper is part of NuGreen's wall plug instead of being located in its base. This is unusual for a lamp as it means the power source connects to the lamp's power cord about six inches away from the lamp with a coaxial/DC power connection like this. The unusual cord composition is supposed to ease the installation of the lamp allowing you to plug the bulkier plug in underneath a desk and then feed the cord behind/though it and connect to the lamp from there. The utility of such a scheme remains to be seen, but we would probably have rather had a bulkier base and a regular cord instead.

All in all, the NuGreen is a very functional LED desk lamp and it's $57.99 price tag puts it in about the middle of the expensiveness road compared to similar LED lamp solutions. It has a lot of environmentally-friendly features, hence the name, but those thankfully don't impact its raw performance as a competent lamp. Bright enough to illuminate your entire desk area and directional enough that the light only spreads around the room if you want it to, the NuGreen is a great choice for a desk lamp and would be perfect to illuminate even the most eclectic PC gamer's domain. 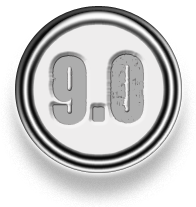