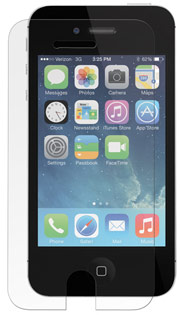 As with any NewerTech product, the packaging that the KXs comes in is cleanly designed and functional. When I opened up the packaging I mistakenly thought that I had accidentally received two protectors in the package instead of one, but that is just how thick the KXs is. When I realized there was only the one I became skeptical at how the touch screen was supposed to still work with something that thick on it.

Having recovered from my initial wave of skepticism I followed the usual screen protector application steps and the installation went almost without a hitch. I say "almost" because while there were almost no bubbles to speak of I discovered that there was a plastic "plug" of extra clear plastic in the cut-out hole for the phone's earpiece and forward-facing camera. These are usually easy enough to spot on screen protectors for iDevices, and I had indeed actually noticed it beforehand, but even though I had taken a tab of plastic out of the hole already, there was still some remaining there after I had already installed the screen protector. I flicked out my handy electronics-oriented pocket knife and managed to pop not one, but two more plastic plug things out of the hole before it actually went all the way through to the device. It seems that each of the screen protector's three layers' plugs had to be removed and having taken out the thickest one at first I had failed to notice the other two parts until it was almost too late. I saw nothing in the installation instructions about punching out these bits and I think that everyone would probably benefit from their future inclusion therein. It's also worth it to note that as with all iPhone screen protectors, having the KXs on your phone impedes the use of touch styli; this is especially true of the KXs because of its additional thickness. Overall, though, the KXs was one of the easiest screen protector installs I have done.

My second qualm with the KXs became apparent shortly after its installation. I requested a "case friendly" KXs model because I use a protective case with my iPhone, but it turns out that I probably should have gone for the full size one instead. I expected there to be perhaps a half-millimetre perimeter around the protector after its installation, but I ended up with my half-millimetre on the right-hand side and a whopping two millimetres or more on the left. While it does still technically cover my entire screen, and indeed means that I was a millimetre or so off in my centring, it's still just on the far side of too small, enough so that I would recommend the "full size" protector for people with all but the most thoroughly bulky iPhone cases. The smaller "case friendly" size may be beneficial for people who would rather not take off their open-faced cases before installing the guard, but everyone else should live through paying the 80 cent premium for the full-size version.

With "hanging chads" and slight bezels aside, the KXs is a truly impressive screen protector. I can't vouch for its ability to stop hammers and ball bearings like in its promotional video, but I can say that feels really nice as you drag your finger across it. Its tactile attributes are hard to describe, but it feels at least as good (if not better) than my previous favourite iPhone screen protector feel-wise, the otherwise horrifically expensive and difficult to handle InvisibleShield. The protector's clarity is superb and any wayward finger/face prints wipe off of it easily on a soft t-shirt without taking extra damage like some of the lesser protectors I've been using recently. Through all of my daily game playing, Reddit browsing, texting/emailing and tinkering I never even noticed a missed tap or swipe. I suppose I shouldn't have been so quick to judge the KXs because of the extra junk in its trunk, because its that junk that's providing the extra protection without sacrificing touchscreen functionality. Ringing in at just under $11, I can safely say that if you're in the market for a more expensive and higher-quality screen protector for your iPhone, the KXs should be at the very top of your list.