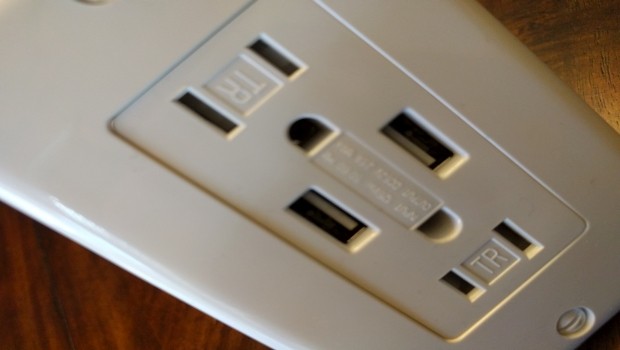 I'm gonna start this article with a bit of an admission — I'm terrified of electricity. I was electrified and heavily scarred as a kid when a capacitor exploded in my face, shredding the left side and requiring multiple skin graft surgeries to repair. I'm comfortable putting my hands into the internals of my PC or a server, but you can bet I've thrown the power cable away from the chassis like it's an electrified cobra made of fire and acid. Obviously the prospect of changing out a wall plug without powering down the entire house makes me more than a little twitchy. When Newertech announced that they were releasing a standard outlet with two rapid-charging USB charging ports integrated, I was only slightly less nervous. As I set up the office in my new home, I knew I wanted a cleaner look to my wiring, and the utility of charging my USB-powered devices in the same space was equally as attractive. 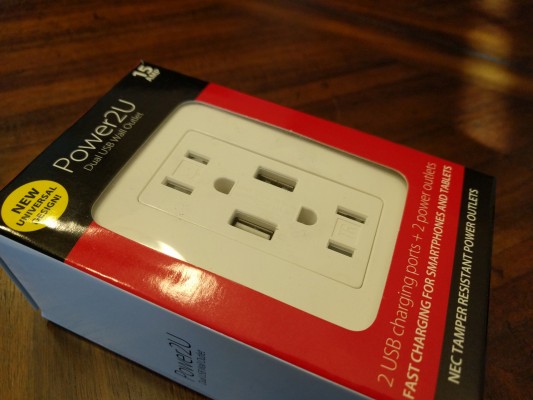 Simplicity itself.
The Power2U isn't just a standard wall outlet with USB ports — those already exist on the market. What makes it attractive is its sleek and sealed design, leaving all of the (in my case) "scary" wiring inside the box. It also has a feature that will pays dividends, literally.

Most wall plugs supply power all of the time, regardless of whether the device is even plugged in or not. This is commonly called "vampire draw," and accounts for roughly 5 percent of the energy used in your home. As we move to the "Internet of Things" and Smart Homes, having dumb wall plugs isn't gonna fly. 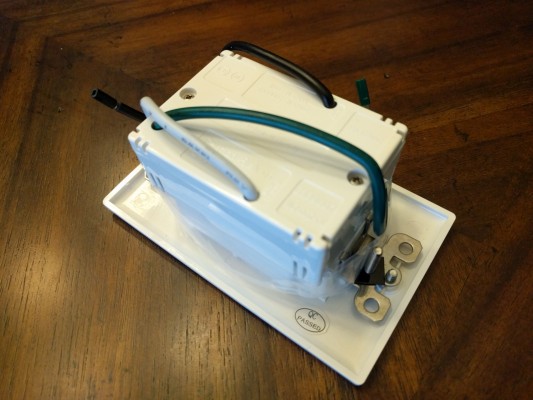 Sealed case design makes me feel safe.
When I sold my old home, one of the gems my realtor latched onto was the fact that we put nice plates and new wall plugs throughout the house. The investment wasn't that large, and the results were obvious when our electrical inspection sailed through without a hitch, and every potential buyer commented on it as a "nice touch." We also put in a structured media cabinet and gigabit wiring, putting the cherry on top of the "tech house." In that time I learned a great deal about UL certification and why it's important.

In my ignorance, I grabbed a handful of the cheapest wall sockets for the replacement project. When they arrived, my friend quickly noted that they weren't UL certified and explained why we were sending them back. UL is an independent safety science company that certifies products as tested and safe for use with modern devices. Given that they've been doing this for decades, insurance companies have grown to trust and demand that all electrical outlets, junction boxes, breakers, and anything else in-line with your electrical system be UL certified. In fact, many places can even deny your claim should something untoward occur (e.g. fire, short circuit, etc.) as a result of an untested item. It was something I'd taken for granted. All of that said, you can see why it's critical to know that Power2U is the only UL-certified USB/Power Plug device on the market. Competitors like Leviton have products that claim to be tested to UL specifications, but none carry the logo. Funny what you can learn with a licensed electrician as a friend. 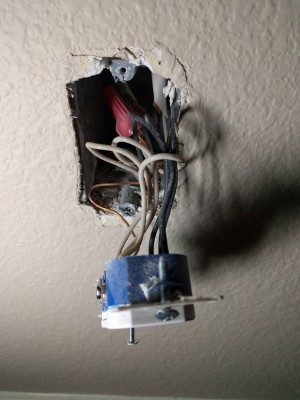 This absolutely terrifies me.
Knowledge in hand, I cracked open the box for the Power2U. Inside is exactly the simplicity I was hoping to see. Three pre-stripped wires, black, green, and white, tucked neatly into the back of the sealed case. Two small Phillips-head screws are all that stands in between you and the inside of the box, if you are inclined, but the Power2U is designed to be a universal-fit, easy-install DIY system. The front plate is a standard size, meaning you can swap it out if you'd like a color other than white, or you have a custom wall plate on hand. The orientation of the wall plugs are inverted from one another, placing the plug on the bottom upside down to ensure they don't interfere with the USB ports.

Most of the current round of cell phones have a rapid charging option. Not all USB ports offer up enough power to do that, but the Power2U plug hands off the 2.5 amps necessary for rapid charging to connected devices. Thanks to an included internal on/off switch, and something Newertech is dubbing "Smart circuitry," it supplies only the requested amount of power and stops supplying power when the device is full. Charging batteries after they are full can reduce their efficacy, and in the age of non-removable batteries, it's important our wall plugs be as smart as the devices they charge. 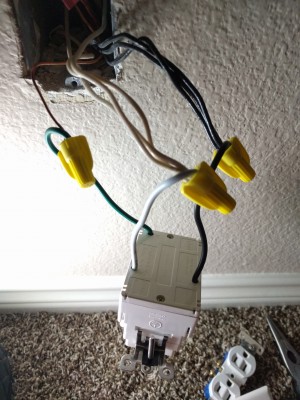 Ok, that wasn't so bad...
With the power shut off to my office (I seriously considered powering off the whole house, as electricity makes me that nervous) I opened the wall plate and pulled it out of the wall. On the plug was three black wires, three white wires, and a green wire. With a quick confirmation with an electrician, I found that it was far less nerve-wracking than I had initially thought. Pulling the black wires (negative) together, trimming the hard copper ends, and twisting the black wire of the Power2U around them, I was already halfway there. Unlike the one I was removing, there were no screws to hook around, no ports to jam wires in — the Power2U is simplicity itself. Wrapping up the white side (positive polarity) and the ground (green), and putting the included twist-on wire connectors, it was time to test. Nervously turning on power, I was happy to see absolutely nothing happen. In this case, no news is good news. I powered down the room to finish the work.

If there is one thing that gave me a bit of trouble, it was the next step — getting the universal box fully recessed into the wall. The hard copper wires have to be pushed back into the work box, leaving very little room for the Power2U box. The Power2U box is roughly twice the depth of a standard two-plug duplex receptacle. In the end, a little finagling got the wiring into the right spots to allow the system to sit flush with the wall. Getting it locked down, I placed the wall plate on top and powered everything back up. 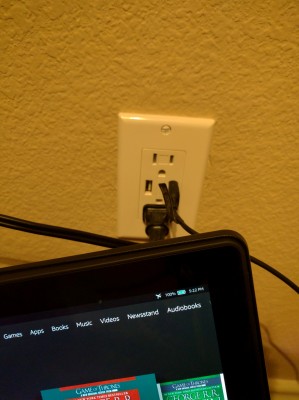 I'm making a note here..."Huge Success."
I decided that my printer would take the trial by fire and plugged it in. It whirred to life, ready to get back to work. My next device to test was my Kindle Fire HDX. It worked fine with the plug, as expected, but it was time to see how the USB fared. Admittedly, it was a pretty big victory for me to see the little lightning bolt indicating a charge appear in the upper right corner.

The final test was the biggest — the rapid charging capability. I have a Google Nexus 6P, which is capable of refilling the battery in mere minutes. The test was simple — after a day of use I plugged my phone in via USB and was greeted by a familiar "Charging Rapidly" message on the screen. Despite my fears, despite my nervousness, I had just changed out a wall outlet (You electricians out there are laughing at me, I can hear it) and added rapid-charging capabilities to a socket within arms reach of my desk.