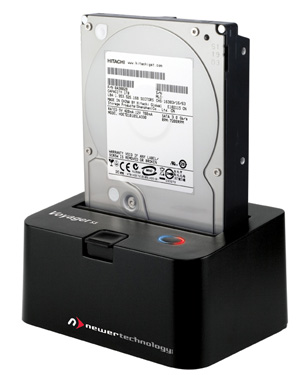 Anyone who maintains a gaming PC for more than a year or two will know that technology changes so quickly that you're forever swapping various parts out of your tower to continue being able to play the latest games at a needlessly high but awesome 100 FPS or more. With the advent of Solid State Drives (SSDs) that are quickly becoming more affordable, most PC gamers are bound to end up with a 3.5" HDD or two that have been orphaned or re-purposed for archiving by a shiny new SSD. Instead of having these drives collect dust or be assigned drive letter Q: and be rarely looked at, Newer Technology has come out with a simplified version of its Voyager Q SATA drive dock that drops FireWire 400/800 and eSATA support in favour of a much lower price point and a handy on/off switch. Read on to find out if the Voyager S3 docked us like a hurricane.

I was pleased with the prospect of being able to put my extra 500GB 3.5" HDD to use since it had been replaced by a 2.5" SSD/HDD hybrid drive in my primary gaming computer. Popping an HDD into the dock is as easy as putting a SNES or N64 game into their respective systems. My only qualm with the drive dock does actually stem from HDD insertion, though. The first time I pushed my HDD into the dock, I wasn't certain if it had been inserted all the way or not. Usually when electronics take cartridges or have to be physically placed together in some way there's a bit of a "click" or at least a feeling that they are connected properly, but with the Voyager S3 you never really feel the resistance of the HDD connectors when they connect with the drive, so you just have to learn for yourself what it's like when the HDD is inserted properly. This shortcoming is counteracted somewhat by the fact that you can just see on the computer whether or not the drive shows up, but some physical feedback would still have been nice.

Other than that, though, the Voyager S3 turned out to be just as amazingly simple and useful as it sounds in writing. The Voyager S3 has to potentially spin a hefty 3.5" HDD (while it is compatible with both 2.5" and 3.5" SSD/HDDs ), so it does require an AC plug of its own, but that is to be expected. Once the HDD is popped in, it's as simple as plugging the included USB 3.0 cable in to a USB port of any version (because USB is backwards compatible, you know) and your internal HDD works like a nice, fast external HDD, especially with USB 3.0 ports. The ability to "hot-swap" drives means you don't have to unplug anything if you're switching between multiple HDDs — just eject the current one when it's not in use and pop in a different one, that's all there is to it.

I tested the Voyager S3 with the USB 3.0 ports on my Retina Macbook Pro and it worked a treat. Transfer speeds, even with my slightly dated 500GB 7200 RPM 3.5" HDD were just as fast as the various USB 3.0 external HDDs we have about the place. It performed just as admirably (though naturally not quite as quickly) using a USB 2.0 port on my gaming PC. Game consoles like the PS3, Xbox 360, and Wii U all recognized the drive right away. I even incidentally started using my old test HDD as an external expansion for the Wii U Deluxe's scant 32GB storage space and have never experienced anything like a functional problem with it.

Overall, the Voyager S3 performs exactly as described and really is an easy way to breathe new life into any 2.5" or 3.5" SATA drives you may have lying about the place. For people that archive a lot of data onto SATA drives or have to deal with a lot of them for work (like a data recovery or computer repair shop) this device would be even more of a dream. If you have unused SATA drives or want a cheaper alternative to the sometimes quite costly external HDDs on the market, look no further than Newer Technology's Voyager S3, you could do a lot worse with your $37.99, and it will definitely save you time and money in the long run. 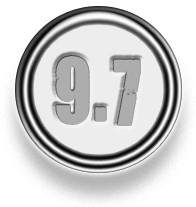