Back It Up! Voyager Drive Dock Review 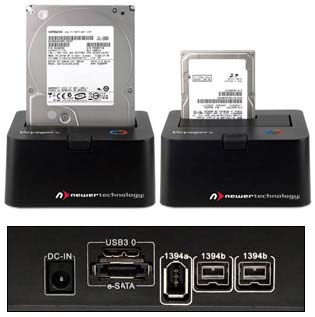 More and more footage is coming from tapeless formats. From formats where the camera medium used to capture that footage is used over and over again. So one needs to back up that footage onto another medium. Yes, there are LTO and DLT solutions...tape. And that is very reliable. And while still expensive, the price is dropping. But not enough to let a small independent editor like myself afford them JUST yet. Soon.

In the meantime, I archive the tapeless footage, as well as finished shows and graphics and other elements to hard drives. TWO hard drives to be precise. As a post supervisor I know puts it..."the footage doesn't exist unless it is in two locations." Two copies...at least. And I have clients who I do work for that I need to keep their media on ice for a few months just in case changes come along.

Now, I can use expensive drives in enclosures, or keep this all on a big RAID tower, but I use my RAID for active media, and enclosures...who needs those for simple archiving? They are more expensive than bare SATA drives. That's what I use.

I did rely on a USB2 dock for quite some time...but that connection is proving to be very VERY slow. OtherWorldComputing.com (OWC) approached me about reviewing a few of their products...and the NewerTech Voyager drive dock was first on their list of options. 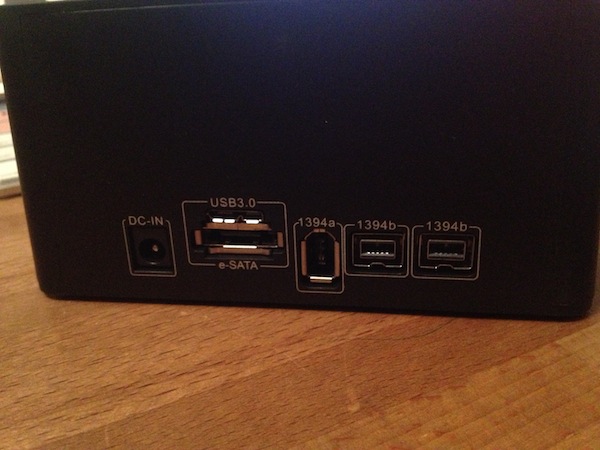 What I really liked about this is that it wasn't only USB 2 or 3. Yes, USB 3 is plenty fast and my computer has USB 3 so I should just be happy with USB 3...but I do have other older computers. And many places I work also have older computers...none that have USB 3. But they do have eSATA or FW800...and if your computer is so old you only have FW400...well, this unit has ALL of those. USB 3, eSATA, FW800, FW400 (Firewire is daisy chainable...so you can add this to your chain). So you aren't limited to USB on your older machines...which can take a long time. You can benefit from the speed of FW800 or eSATA. 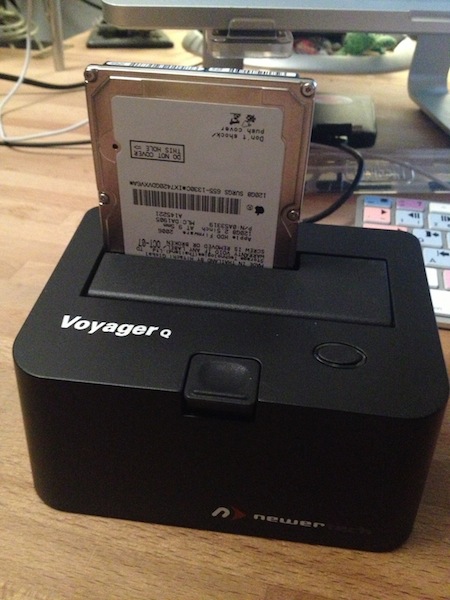 I first used this unit to clone my computer's hard drive, as I was going to do an OS update. I ALWAYS clone my working system before I update....in case something goes wrong, I can always revert back to the old working system. So I pulled out my 2.5" drive that I used for this purpose (It's the one that originally shipped with the computer, but I had since replaced it with a 500GB SSD from OWC). I connected via FW800 and cloned my system. 216GB copied over in 30 min.

Then I did the update. And wouldn't you know it...things didn't work out as I had hoped. (the OS version and my main editing app didn't like each other)...so I had to revert back. NOW...how did I revert back? I booted to my cloned drive. I've always had issues with trying to boot from an external drive connected via USB...even USB3. It's hit or miss...sometimes It'll boot, sometimes not. But with Firewire...400 or 800...it'll always boot. Because this unit had FW800, booting to the clone was a breeze, and I had my working OS back up in under an hour.

VERY handy to have a dock with this many connections. And OWC is kind enough to provide you with all the cables: 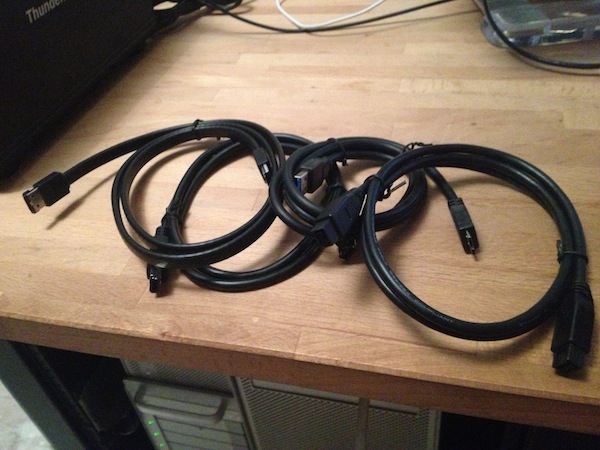 Oh, and if you want transfer speed numbers for the various connections, here they are for USB3, eSATA and FW800...the three connectors I have access to on my laptop. The eSATA connection is through the Thunderbolt bridge...so speeds might vary if you are using a card in an older tower.

I transferred a 1.2GB file using various connections...USB 3, FW800 and eSATA. I didn't use FW400, as my computer didn't have that connection. Sure, my tower did, but I was too lazy to turn it on and try it out. It's a VERY legacy connection...barely anyone uses it anymore. Anyway, here are the various timings:

And I ran the BlackMagic Speed Test with all the connections. I won't post all three as they all were almost exactly the same. 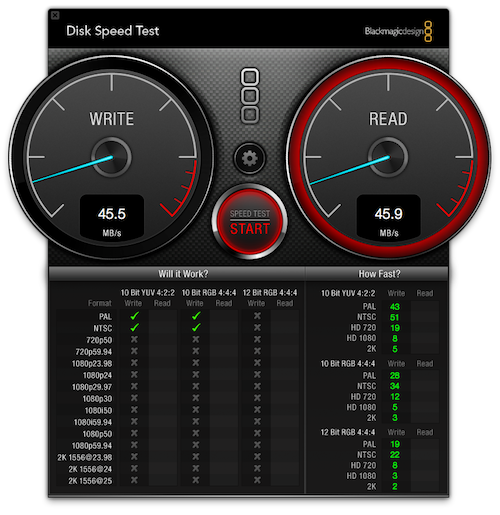 The drive used was a simple Western Digital Caviar Green 1TB drive...5400 RPM. And again, this wasn't a review on how this can be used for editing, as you can see it MIGHT be able to do one stream of ProRes SD. But rather as an archive solution. The speed you want is in the transfer. So for the fastest transfer....use eSATA. Or USB3. 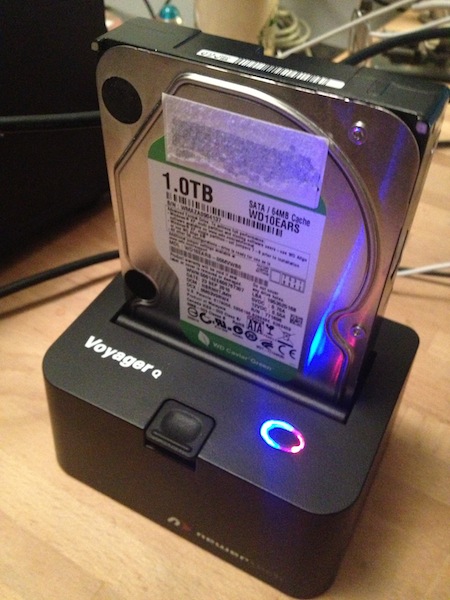 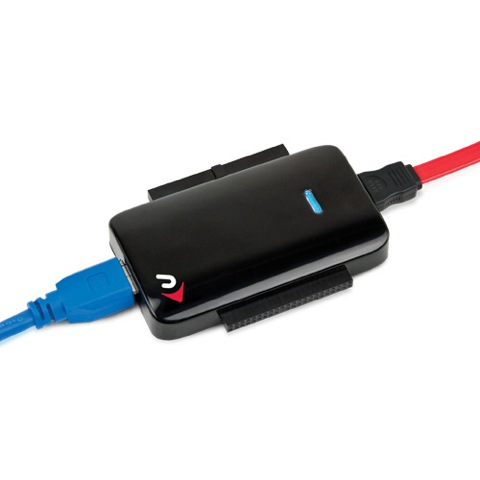 OWC also provided a NewerTech Universal Drive Adapter, a simple cable kit that allows you to not only connect to bare SATA drives, but also connect to even older drives, such as PATA drives that don't have the typical SATA connection, but rather a long two-rows of pins. This is very handy as I do have a few drives that are PATA, that I did use to archive. This allowed me to access those drives, and copy the information to more current drives....ones much younger that will last longer. So, ‘yaay' to that. This only has the USB 3 connection, but most if not all current computers have those, and it's plenty fast. Nice and simple kit...works with 3.5" drives and 2.5" drives.

Why this rather lengthy post for a couple of drive dock products? Well, I didn't just want to go "Here's this thing you can put a drive in and here's how fast it works....blah blah boring tech talk blah blah." I like to give real world examples of how you might use the products...how I use the products. So the main takeaway from this is BACK UP YOUR STUFF! In two locations. And clone your OS before you update...just in case. And here's a darn good tool to do all of that stuff with.
The above article has been included on our site for archival purposes only.
To see the article as it appeared in the original published form, click the link provided.
All stories have been captured without modification to their content.