Phone cases generally follow the "pick two" maxim, with the three axes being protection, style, and cost. The NuGuard KX case by Newer Tech is no exception to this, but it does attempt to pick two and a half out of three, at least. Boasting mil-spec protection, the case aims to protect the iPhone 4 series and iPhone 5 with at least a modicum of style at an affordable price point. How well does the phone protector hit (or protect!) its target?

The Nuguard case isn't a clamshell -- it's a one-piece case. The case, constructed with a durable but malleable exterior material with a felt-esque lining, also packs what the company refers to as "X-orbing" gel and has passed a wide variety of tests, as shown in the video below for the MIL-STD-810G protection requirements. 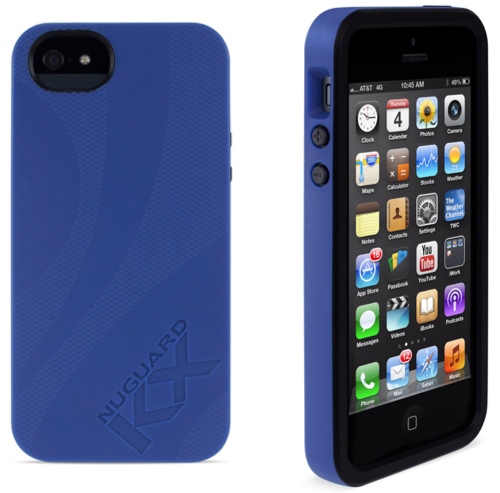 The case has well-sized cutouts on the sides for the camera, flash, bottom speakers, mute button, headphone port, and Lightning port. Bumps on the exterior of the case transfer to the volume switches. The case adds a bit less than a half an inch in every direction, notably smaller than the Otterbox Defender. Reports have surfaced that the Lightning port hole isn't large enough, but we tried it with the Apple cable and three other off-brand cables and found no fit issues.

We were impressed by the build quality of the case -- to prove we didn't have a case with quality higher than the norm, we took our case to the local Apple store and a nearby MicroCenter to examine some other examples of this design. All of the NuGuard cases we examined had the same attention to detail and precision tooling that ours did.

Before our day-to-day use of the case, we did try some unorthodox testing. We dropped, tossed, and generally hurled the encapsulated device onto dirt, wood, tile and, (with some prodding) concrete to test the durability of the case, and were wowed by the shock aborbing properties of it. After the initial lab tests, we handed the case to our most accident-prone tester and she has been hammering away at it for three months.

We were given the "Midnight" colored case. Other than a single stain of unknown provenance on the back of the case, and after repeated assaults on the case by a business professional carrying way too much back and forth to work, the iPhone and notably, the case itself saw no damage after repeated shocks, including one our tester called "a ricochet off of every door surface possible" out of a Ford Explorer SUV to the uneven ground in a local hospital's parking lot.

We've lived with the case on an iPhone 5 for a few months now, and feel justified in giving it our highest ranking. While it won't protect the screen from a direct impact by a sharp object, few if any, cases will. We've subjected the phone in the NuGuard KX to much abuse, on purpose and by accident and found it not lacking in any regard. There are cases for $5 at budget stores. There are cases that do little to protect the phone that cost more than this. Yes, the case is $35 full price, but the replacement cost of a device when not under the aegis of insurance is much more than this case.