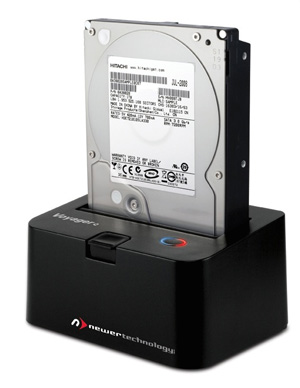 The Voyager Q dock from NewerTech allows you to access a 2.5- or 3.5-inch SATA drive with a Mac (or PC) using a conventional connection, USB, FireWire or eSATA. It's a boon for those moving on from the old Mac Pros but want to keep a SATA drive or two active. NewerTech's implementation is very good, but not without some minor issues. Basically, this is a powered dock that accepts 2.5-inch or 3.5-inch SATA drives. It can be used with SATA revision 1,2 or 3 drives, that is, 1.5, 3, or 6 GBps. There's a spring loaded cover plate with an aperture that cleverly holds either sized drive nicely in place. There are several models from NewerTech, and if all you need is USB 2/3, the Voyager S3 sells for under US$40. The one I'm reviewing here, the Q, has the following connections. Operation
The Voyager Q provides the SATA connector inside, power to the drive, and bridge circuits to provide for the external interfaces. Only one of the external interfaces can be active at a time. If you connect more than one, the fastest interface will be auto-selected. 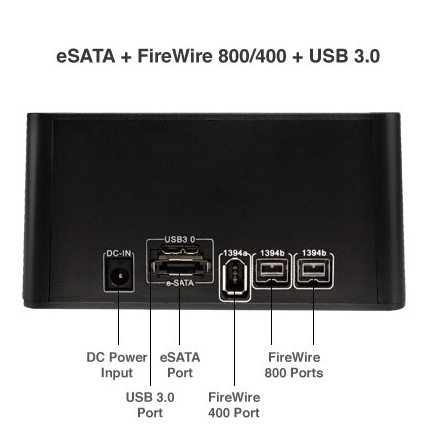 The ports on back are very close together and uneven.
The procedure is to make sure the unit is connected to power and the Mac with the selected interface, make sure the power is off (there's a blue LED power light), insert the SATA drive, then press the power button. The drive spins up and mounts just as if it had been inside a PC or a Mac tower.

There's an issue at this point that needs clarification. The Voyager product page currently says, "Accessing multiple drives couldn't be simpler as Voyager's unique design makes hot-swapping drives a breeze." This wording, in NewerTech's language, means the host (say, a Mac) doesn't need to be rebooted when properly swapping out SATA drives. But by using the term "hot-swapping," an inexperienced user may wrongly conclude that SATA drives can be safely dropped in and pulled out (hot-swapped) at will when the Voyager is powered up. Not so.

In fact, the User Guide makes a strong point about having the power off when inserting or removing a SATA drive and then only applying power when it's seated. You should follow the User Guide's advice. Also, the User Guide should add a section 2.3, "Drive Disconnection" that emphasizes the sequence of 1) dismounting the drive in the OS, 2) turning off the Voyager's power, then 3) pressing the mechanical eject button.

In fact, for those who may forget the sequence, a simple decal on the front that says, "Power must be off before inserting or removing drive," would be a terrific idea.

Also, if the Voyager is part of a FireWire 800 daisy chain, NewerTech recommends it be the only or the last device in the chain in order to avoid disrupting the connection to other drives in the chain when the power is killed.

Given all that, in the process of testing the Voyager Q, I repeatedly disconnected and reconnected a SATA drive using the proper steps. It has my iTunes library on it, and I was constantly interrupting, then relaunching music playback and there was never a hiccup or failure to operate as expected. 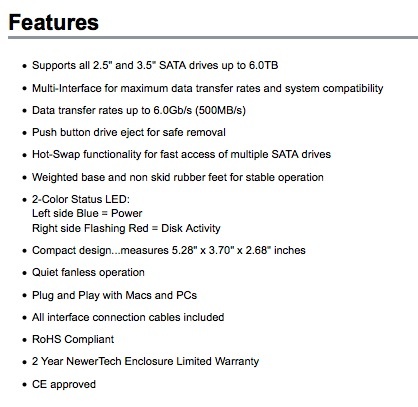 Example Uses
There are several notable scenarios for a device like this. First, suppose you are moving away from an older PC or Mac tower (Mac Pro) and towards home RAID 5 system. But you need to be able access the SATA drive(s) that were inside either temporarily or for archival purposes.

Another case might be a RAID 1 system with two mirrored drives and one fails. You're unable to find an exact match in block size to rebuild the RAID 1 pair, so you elect to pull the data off the remaining good drive pending a new storage scheme.

Finally, say you want to be able to economically add vast storage to a desktop Mac without the added expense of a fancy enclosure. One could do that, but it's probably a bad idea, however, because the back of the SATA drive is very much exposed.

I can attest that I've personally experienced the first two scenarios above, and a device like this is a lifesaver.

Design
I was especially impressed with the design, workmanship and features of the Voyager Q. The case is black plastic, but it's rugged and clean in the design. A spring loaded slotted flap on the top keeps either a 2.5- or 3.5-inch drive well in place. The power button has a two-color LED status light. (Blue indicates power, red indicates disk access.) It weighs 20 ounces (570 grams), and that's enough heft so that, when empty, cables don't tug it out of place. The bottom has rubber pads so it'll stay put and not scratch a desk. However, the connectors on the back are rather close together and oddly aligned.

There's an eject button on the front to assist with the eject of the SATA drive. The power brick has a spiffy connector that allows you to plug in into a power strip directly or plug in a longer cable that has a conventional power plug for either tight spaces or an extension of the power cord or both. (However, that extension cable is not included, but is available for US$2.99)

Most of us here at TMO, me included, don't think it looks as good as the previous "toaster" design. 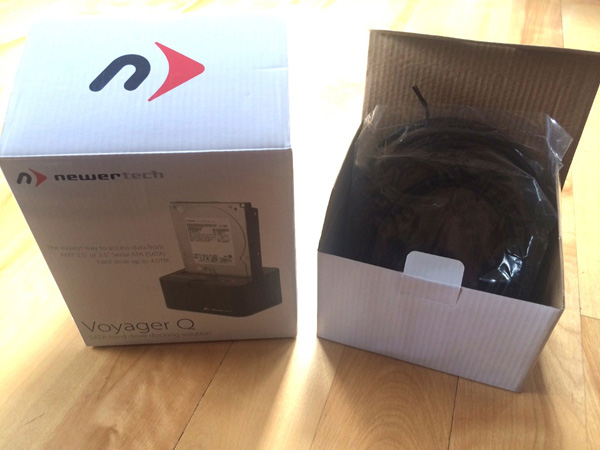 One whole box of cables inside (four sets in this model).
One of the things I like about NewerTech products like this is that all corresponding cables are included. While most customers will only use one initially, there could likely come a time when the unit needs to use a different interface on a different computer. The needed cable is right there in the box. That avoids a scenario of having to rifle through an old box of cables, wondering if the one found will work, or else mail order and wait a few days. My hat's off to NewerTech for doing this, and I hope the company never changes this wonderful policy.

Packaging and User Guide
Half of the box ships with the Voyager Q in a plastic bag, but the other half of the box has an inner box full of good looking, quality cables, also in plastic bags. 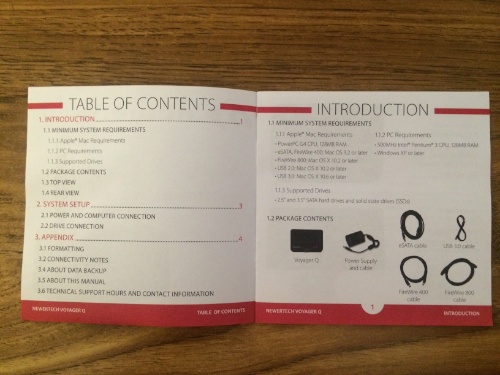 A good User Guide is desirable and is delivered.
Included is a seven page pamphlet that shows the package contents, how to get started, and troubleshooting tips. There is a boatload of information on how to contact NewerTech for customer support, and it goes without saying that NewerTech and its sister sales group, Other World Computing, are renown for their excellent customer support, of which I can also attest.

There is a one year limited warranty with a 48-hour turn-around time.

Windows and Linux are also supported. See the the product page > Specs > Compatibility.

Summary
First, I am impressed by the design, engineering and quality of the Voyager Q. All the connectivity cables are included, and it's compatible with a wide range of operating systems and connectivity technologies. A good paper User Guide is included. There is an awesome amount of technical information provided on the product page in the blue tabs: Features, Includes, Gallery Specs, Reviews and Ratings.

On the other hand, there are some minor implementation issues. It's a common occurence for a new power adapter brick not to fit in a loaded power strip, and the extra power cord that helps solves that problem should also be included. The ports are close together and not nicely lined up. The "hot-swapping" language by NewerTech is confusing, and one should be aware of proper operation. All in all, however, the Voyager is a very good product.
The above article has been included on our site for archival purposes only.
To see the article as it appeared in the original published form, click the link provided.
All stories have been captured without modification to their content.