Aluminum Wireless Keypad for NewerTech: a numeric keypad without very effective over 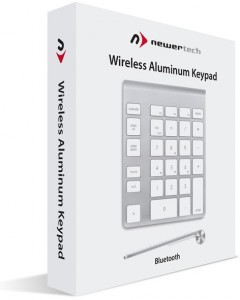 Nowadays, there is a range of keyboards with or without keypad. The choice to bring a keyboard with numeric keypad is not, in most cases, a choice that users make. In fact, the choice of a keyboard is usually determined by its functions and the use that will be made. And the numeric keypad is often excluded from the decision making process.

But if you are a user who uses many numbers, the keypad can be an indispensable tool. If you are a casual user of this portion of the keyboard, or if you want to use more than one device, the company NewerTech offers wireless keypad with Bluetooth connection, compatible with Mac computers, PCs and appliances Mobile iOS or Android. In fact, the device is compatible with almost any device with a Bluetooth connection. 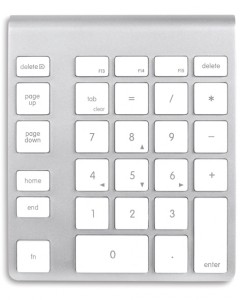 Named Aluminum Wireless Keypad (you will pass on the originality of the name), its overall design, the keys and the aluminum housing is extremely similar to the keyboards and Apple devices. To the point that without regard to it, a user could easily confuse it with an Apple product.

The keypad is powered by two AAA batteries. The NewerTech company even provides a plastic holder for attaching a keyboard number pad. Note that this support only works with wireless keyboards Apple (or any copy) because its design is designed to slide around the rounded part, under the keyboard. The main shortcoming of this support is the power button located on the left. So if you want the unit off at the end of each use, remove the keypad support. The choice of this design is surely part of a greater ease of access to the battery compartment on the right side. In this context, it would have been more logical to set a button on top of the unit.

Side configuration, the product is extremely easy to install. Instructions, written on the back of the unit, explain the different color codes of light beneath the keys "=" and "8". To activate it with a Bluetooth device, simply hold down the power button until the light flickers blue. Then it only remains to follow the Bluetooth pairing procedures of its device and voila.

The keypad turns a tool that greatly facilitates entering numbers, especially on mobile devices. We used it with the Calculator application of the iPhone and the data entry was done much faster.

Finally, a function less well documented this keypad is the possibility of using the "Fn" key with the "Enter" key. Indeed, this combination allows to exercise the true function of "Enter" key while without the "Fn" key, the key is rather a return to the next line (Return). This allows to use these two functions that may be distinct in software such as spreadsheets (Numbers, Excel, etc.).

The product is also available with black buttons. It is available on the website NewerTech the regular price of US $ 54.95 and it is possible to get the purchase from several distributors . At the time of this writing, the product was on sale on the website for US $ 42.00. A European version is also available at the same price, but now on sale for about $ 7.00 more than the American version. NewTech is the product of competition with the keypad YourType ™ Belkin , sold in Apple stores , for $ 49.95. 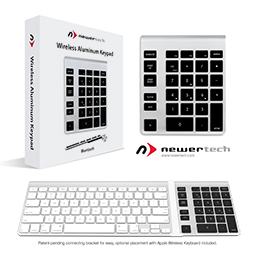 We left very satisfied with our use of the Wireless Keypad Aluminum and we will not hesitate to recommend it to our readers.
The above article has been included on our site for archival purposes only.
To see the article as it appeared in the original published form, click the link provided.
All stories have been captured without modification to their content.