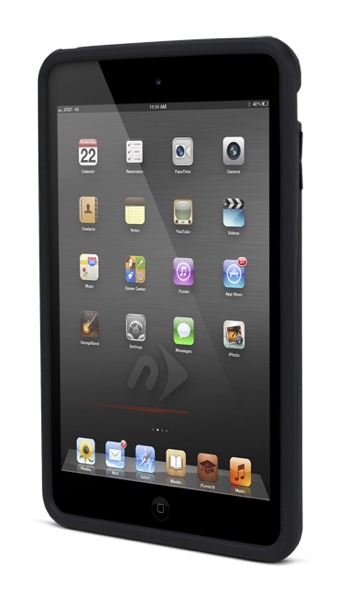 NewerTech is no stranger to great accessories, especially when it comes to making cases that meet military specs (commonly referred to as Mil-Spec in short). Earlier this year, NewerTech released the NuGuard KX case for the iPhone 5, and in our review we found it to be the best all-around case for the iPhone 5. In fact, the NuGuard KX never again left my iPhone 5 until the day I switched to Android by way of the Sony Xperia Z.

The NuGuard KX for iPad Mini, like its iPhone 5 counterpart, is a firm yet flexible enough case that fits around the iPad Mini's backside, leaving only the touchscreen and most of the front bezel uncovered. The oven-molded front edges of the case offer protection for the touchscreen by creating space between the front glass and the KX case on the front. In case of an accidental drop, the space keeps separation that will prevent scratches and breakage. Direct force to the front panel inside the KX case's edges will likely damage the screen, but this would be the case with any other case with a screen protector like an Otterbox or Trident, or even a standalone screen protector film appliqué. Screen protectors do provide scratch resistance, something the KX cannot claim, but without professional application most screen protector appliqués become nothing more than a sea of air bubbles.

However, NewerTech has implemented its patent-pending X-Orbing gel into the NuGuard KX for the iPad Mini as well. This proprietary gel is really the magic behind the KX's mil-spec protection at only a third-of-an-inch thickness. The gel, which inhabits the layer between the tough TPU outer shell and soft interior lining, absorbs the shock waves caused upon impact. Without this X-Orbing gel, shock waves would travel throughout the case until absorbed by a heavier material, which would typically mean the glass touchscreen, therefore causing cracks.

The iPad Mini NuGuard KX only comes in black now, unlike the iPhone 5 version with an array of colors to choose from. I'd like to see them offer more color choices, as admittedly one of my favorite things about my KX on my iPhone 5 was the awesome red color it was.

The NuGuard KX for the iPad Mini has cut outs for the bottom Lightning connector and the stereo speakers next to it, as well as the mute/rotation lock switch on the upper right side. Both the volume rocker and sleep/wake buttons are covered, but respond instantly even with the case covering them. The textured feel to the outer shell allows for a much better grip than other cases made of slick plastic, but not as rough and sticky as the rubber outer shell of an Otterbox.

Application and removal of the NuGuard KX is a breeze. The TPU is pliable enough that wrapping or unwrapping your iPad Mini takes little effort or time. Unlike the Otterbox Defender or Trident Kraken case, which can be exhausting to apply or remove, the NuGuard KX is simple and straightforward.

The reason consumers purchase cases for their tablets is either one of two things, style or protection. Rarely do the two go together. Cases with graphics, designs, or in vivid colors are usually printed onto cheap plastic or dyed into silicone, neither of which offer any real protection for the device. On the other end you have your high-end mil-spec cases like the Otterbox, Lifeproof, or Trident cases that offer great protection, but aren't really all that attractive on your device. The NuGuard KX falls somewhere in the middle, it retains the sleekness of a silicone case without all the rubber and rough looks.

But NewerTech isn't aiming for cute, they're aiming for protection. And the NuGuard KX's X-Orbing gel lives up to its claims. In my tests I was able – while holding my breath admittedly – to drop the iPad Mini from about 5.5 feet high on to both tile and carpet without a single sign of any damage to my iPad Mini. NewerTech has taken testing further, earning the KX the Mil-STD 810 specification, meaning the NuGuard KX will protect your device, according to the U.S. military, under “extreme conditions”. If it can survive a fall from a M1 Abrams, I'm pretty certain it can survive your young two-legged war machine or clumsiness.

The only missing piece is that protection of your screen from scratches. While the edges of the KX case may prevent screen breakage from corner impacts, your iPad's screen is still naked with the NuGuard KX. While I prefer this myself, it may turn a lot of people away as they're looking for 360 degree protection, and I can't blame them. The screen is probably the most important piece of your tablet.

At $39.99, the NuGuard KX is by far the best value when compared to other cases in the same class we've alliterated to in this review. It's sturdy yet slim, protective and not a complete eyesore to look at, and lastly does exactly what it claims to do and keeps your iPad Mini far safer from harm than other cases. Furthermore, NewerTech offers a Lifetime Warranty on the case (not your iPad Mini), meaning NewerTech stands firmly behind this product.

Like its iPhone 5 model, once again NewerTech has impressed me with the NuGuard KX. And just like my KX for the iPhone 5, the NuGuard KX isn't leaving my iPad Mini again. It's a case I'd seriously recommend to anyone, and clearly a Mind Of The Geek Editor's Choice award recipient.

The NuGuard KX for iPad Mini can be purchased online now at OWC and other online retailers.