Network World - I recently swapped out my existing iPhone 5 case from for a Newer Technology model dubbed the Nuguard KX just in time to put it to the test at the Interop Las Vegas convention.

[There was nothing wrong with my existing case, the Xentris Wireless Hard Shell, and you can see my review of it here.] 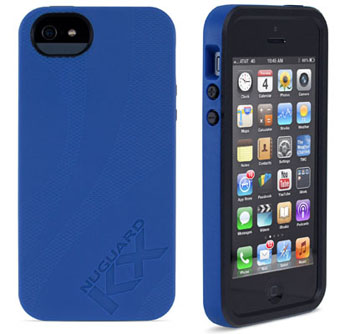 The biggest difference between the two cases is that my older one is a two-piecer, which made me a little nervous at first that it might come separated, but it never did (though did notice at least a little gunk had crept onto the smartphone's exterior once I took the case off to make the switch). The Nuguard KX comes in one piece and, as advertised, goes on and off easily but also fits snugly. Its United States-borne "Hyper advanced X-Orbing gel," whatever on earth that is, does make for a flexible yet firm iPhone exterior (my recent case felt as though it might be brittle, but didn't prove to be so). Newer Tech says the construction allows for kinetic energy to be evenly distributed across the case.

The model I'm using is called Midnight Blue, with a black rim that goes across the front of the phone. Other models are Roulette Red, Eagle Shield, Trooper, Buzz, Rose and Nubar Forest.

My biggest surprise with the case, when I went to press the power button on the top right side of the phone, was that the case included a button over the smartphone button. That took me a second to get used to, but I kind of like it in that it requires a firm push to get the phone to turn on (no accidental turn-ons).

The case, which is made in China, has nice clean cutouts for the iPhone's speaker, inputs, etc. The back of the case features a slightly raised texture to make for a good grip.

Newer Technologies promotes its iPhone 5 case as being military drop-tested and has videos to show this off. Hopefully, I won't need to take advantage of such an extreme test.

The case (also available for iPhone 4/4S) costs $35 and comes with a lifetime warranty.