We've had the NewerTech NuGuard KX Protective Case and Screen Armor for the Apple iPhone 5s in our possession for a while now and we've had ample opportunity to put it through some real world tests. NuGuard makes some bold claims about the level of protection that their products provide and we've had a chance to see it for ourselves. 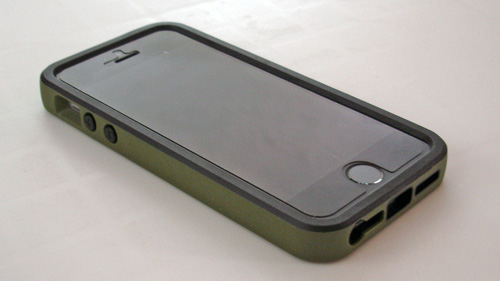 But first, let's give credit to the amazing job that the human body does at being resilient. Daily living immerses us in a surprisingly harsh environment. Just think of how many falls, bumps, crashes, and exposure to liquids that we experience every day with little or no ill effect. Now any time we use phones, smart watches, tablets, fitness trackers, etc… we bring them into that same mix. I'm sure you already know how quickly and easily they can get damaged when we subject to them to the same abuses. It's understandable why the products that aim to protect these devices are such a huge part of the market that surrounds our wireless and wearable technologies. Go to any trade show, or any mall, or any gas station kiosk, and you will find a seemingly infinite number of companies making cases and covers intended to save our devices from certain destruction. Because there is such a glut of "me too" products in this field, only a few of these have really caught our eye. One such offering is from the company HzO, which is a manufacturing process that makes electronics nearly 100% liquid proof. However, it can only be applied during manufacturing and is not meant be added to the device by owner. The NuGuard KX Protective Cases and Screen Armor, on the other hand, can be used and installed by any of us at any time.

What makes the NuGuard KX products unique? The use of impact absorbing reactive gel. We first became aware of reactive gel about 7 years ago when athletic apparel and protective gear companies started using it in their products. As far as we know, it was the 3DO company that developed the first versions of it and licensed it to other manufacturers. How does it work? Here's 3DO's explanation but to us, it just means that under normal conditions the gel is soft and flexible. However, the more violently it is hit with force by another object, the more the gel hardens and disperses the blow across a greater surface area and diminishes the effect of the impact. We've already personally experienced the benefits of this type of technology while crashing into things on our mountain bikes (thank you body armor!). We immediately recognized the potential of using it for protecting our favorite electronic wireless devices.

The first thing we did was to install the NuGuard KX Screen Protector. Here's what it looks like in the package: 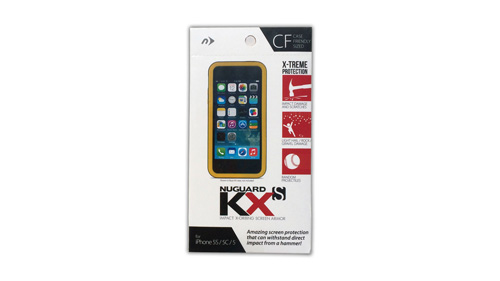 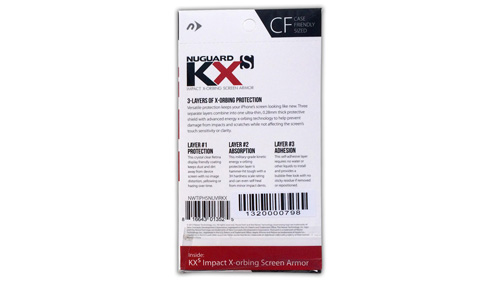 And besides the screen protector itself, here's what is included inside that package: lint free cloth, adhesive dust removal tool, and application tool. 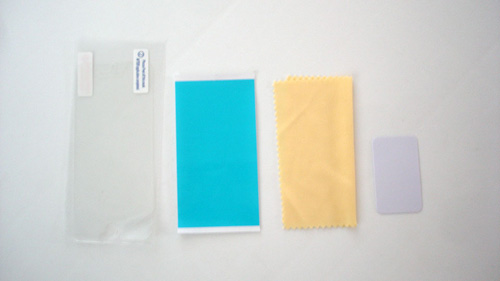 Here's what it looks like halfway through the application process: 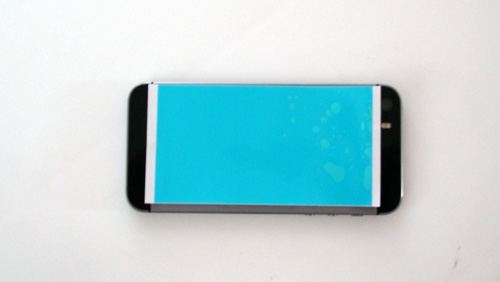 The blue layer is a tear-away film that is provided as a surface by which you can apply the smoothing tool without having to worry about scratching the actual screen protector. That color really helps distinguish it from the clear layers as well as the phone's screen itself so that you don't accidentally try to remove the wrong layer at the wrong time. As soon as the screen protector is positioned and smoothed to your satisfaction, simply peel the blue layer off and enjoy a virginal, blemish-free NuGuard KX Screen Protector. The install went very smoothly and we were able to achieve a clear, air bubble-free application.

PLEASE NOTE! The following image is actually somewhat misrepresentative of the results. The NuGuard KX Screen Protector is nearly entirely transparent. So much so that it was exceptionally hard to actually have it visible in our photos! We had to over-light, over-expose the shot and use some funky, macro-focused angles just to get the edge of it to show. What looks like a lint and dust along the edges does not show up to the un-aided eye. The best shot we took of it was actually taken after this and appears at the top of this article. More about why we took this shot up next… 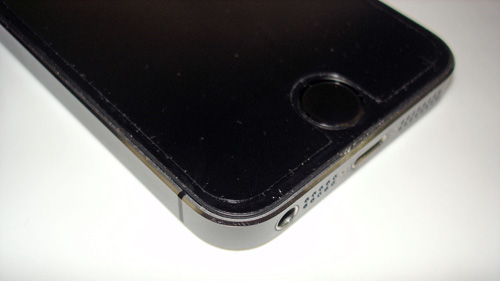 One of the things that we noticed was that the NuGuard KX Screen Protector didn't come quite to the edge of the screen. 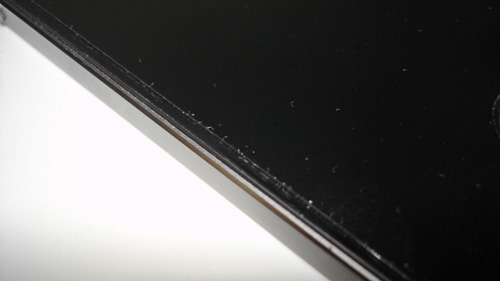 Initially, we thought it might be a case of poor sizing and that it might leave the edge vulnerable, but apparently there is a reason for this. As the folks from KX NuGuard explain, if it did go all the way to the edge it would mean that taking the case on and off would risk peeling up the edges of the screen protector.This would be a bad thing! Better to leave a small gap and extend the life of the product. As seen in the image below, NewerTech wisely offers their screen protector in both sizes, depending on your needs or case requirements. The full coverage version is shown on the left and the case-friendly version is shown on the right. You can easily use this with other manufacturers' cases and in a moment we'll show you why you might want to do just that!

Next comes the NewerTech NuGuard KXs Kinetic Energy X-orbing case. Here's what it looks like in its retail packaging: 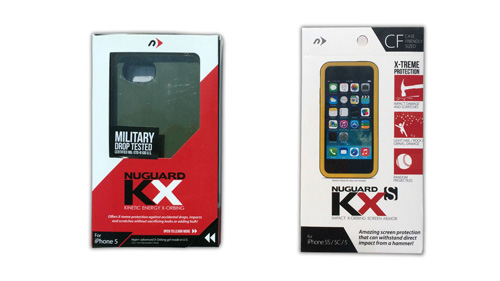 The case also incorporates reactive gel for the same impact dispersion qualities. A nice details is that it uses a felt-like material as a liner to make sure that your phone is truly pampered while inside the case. Not much of a chance of your phone being scratched or abraded by the case. 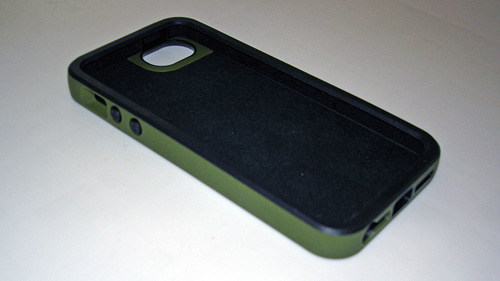 The fit is excellent, with just the right amount of room around the cutaways to provide easy access to the microphone, speaker, and controls of the phone without sacrificing protection. 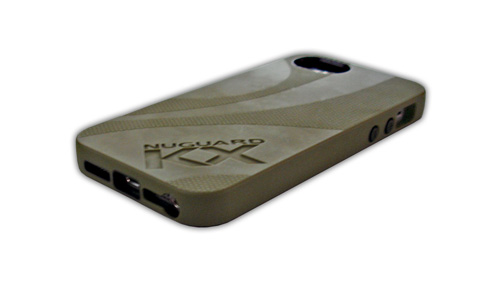 What's great about this case is that even though it fits the phone very closely and adds very little to the overall size of the phone, it still has some "give", some squishiness, to the way it feels.

So, how does it work? Does it live up to the hype? And why would you choose this over other protective cases?

First, reactive gel, what they refer to as "kinetic impact absorbing" gel, simply works. We wish we had a video camera available at the time, but we viciously stabbed this thing with both the blade and the blunt ends of a very hefty stainless steel butter knife. Not only was there no damage to the device, but even the blade end of the knife only left the most barely detectable checks in the protective film. They weren't kidding in their ads that it exhibits some "self-healing" properties. Those check marks had almost completely disappeared after a few minutes. Only by holding the screen up to a very bright light at an odd angle made them visible to the eye. Please keep in mind that a butter knife has a rounded and dull blade. We're not sure how it would do with a sharp, pointy tipped blade. We were too chicken to try. And we have a feeling that a truly sharp object would most likely penetrate and damage the screen beneath. The reactive gel will go a long way, but it's not Kevlar bullet proof material. Here's a video with some of the tests that the folks at NewerTech did on their own: Second, we even took the phone on a few random tests, tempting the fates with a haphazardly stowed phone in the back pocket of our mountain bike jersey. It actually took a few rides to get the phone to dislodge from the pocket. It was harder than we thought and it's not in our nature to intentionally wipeout or attempt to destroy our own phone. But after a few too many jumps and jostling through some deep ruts it eventually came out, tumbled down the trail, and came to a stop only after a riding buddy sprayed it with debris from a most excellent skid. Here was the result: 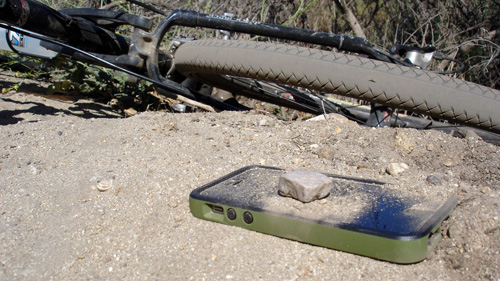 Brushed it off. Checked its functions. Good to go. Back in the pocket it went: 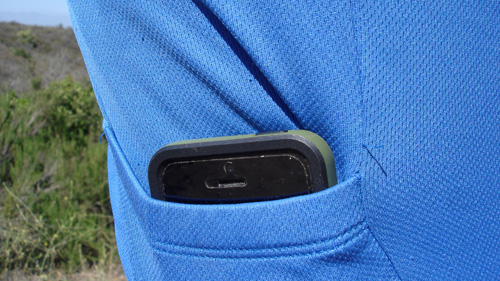 We'd say that the case, and especially the screen protector, completely live up to the hype. We could see using the screen protector regardless of what case we chose, or as a suggestion to those who like to show off the beauty of their phone in its naked state.

So, why would we go for this case when it comes to rugged protection and not one of the fully waterproof cases that are available? So why would we want to suffer from all of these drawbacks all of the time just for the exceptionally rare occurrence when we might end up submerged in water? If we end up submerged in water that unexpectedly, we have other things to be worried about besides the state of our phone. Maybe if you're a lobsterman or work as an animal trainer at Sea World it would be worth it, but for most people, having 24/7 waterproof protection just isn't needed and the tradeoffs are just too big.

Hopefully soon all personal electronics will be treated with a process like HzO, but until then we'll stick with just a great case with top notch impact proofing like the NewerTech KX Screen Protector and Case. They are also making these for a growing variety of newertech kx phone and newertech kx tablet. We recommend them.
The above article has been included on our site for archival purposes only.
To see the article as it appeared in the original published form, click the link provided.
All stories have been captured without modification to their content.