I am a musician and music composer/producer. I use my iPad at gigs and in the studio in a variety of ways. I recently tried the GripBase Podium and found it to be well built and very useful.

I used it on a gig to display lyrics on my iPad. A serious consideration for me is the stability of such a device. I found the weighted base and stand to be very stable and the ability to adjust to various heights and viewing angles excellent. I used it with an app called OnSong. The app makes it super easy to fin the lyrics to most any song. It also has a feature that allows you to have to lyrics "scroll" down over time. You can adjust the time for each song for hands free operation...very useful!

I also used it in my recording studio to position my iPad perfectly when using guitar amp simulation apps to record with.

The GripBase Podium is a well designed, portable and inexpensive addition to my iPad accessories and now that I have it I can't imagine being without it. Well done! 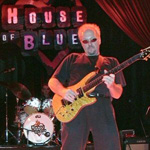 Roger Adler is a four-time Emmy nominated composer/producer/performer, and is a contributing writer for Mac Design Magazine. As a session musician, he has played on over 1,000 national TV spots, and he was also the Music Director for "The Best of Comic Relief TV Series" on A&E TV, starring Whoopi Goldberg, Billy Crystal and Robin Williams. He has also appeared in the movie "Groundhog Day", starring Bill Murray.

Adler regularly works as clinician for Brian Moore Guitars and has done presentations at MacWorld Expo, the Mac Design Conference and at Apple stores throughout the midwest. He has composed and performed TV spots for Wrangler Jeans and has also produced annual meetings for Philips Electronics in Antwerp, Belgium. He regularly provides music for corporate events in Chicago, Las Vegas, New Orleans and San Francisco for clients such as Amgen, Pepsico, Dermik Labs, and was the Music Director for the popular TV Series "Wild Chicago" for 15 seasons.
The above article has been included on our site for archival purposes only.
To see the article as it appeared in the original published form, click the link provided.
All stories have been captured without modification to their content.