With all of the hype about Apple's newest iPhone and Apple Watch, one could easily forget that phones and watches have lineages dating back centuries. Interestingly, the computer keyboard, that mainstay of desktop inputting, can trace its roots back to the invention of the typewriter — right around the same time that the telephone was invented.

Of course, typewriters typically had a row of numbers across the top, but nothing that would resemble a calculator-style numeric keypad. That particular section of a modern computer keyboard can actually trace its lineage, and layout, back the Sustrand adding machine in 1914.

When Apple revamped its line of computer keyboards in 2007, the sleek aluminum devices came in two versions: a wired, full size model that included the numeric keyboard, and a more popular (and pricier) wireless, compact model that omitted it. Anyone hoping for an official Apple wireless version with a numeric keypad was out of luck.

Like in many other areas (floppy drives, CDs), perhaps Apple was foreseeing the future ahead of everyone else. Just recently, in fact, Sibelius expert user Robin Walker on this blog said that the keypad is "an object which is by now almost extinct. Nothing more clearly labels Sibelius as a child of the 1990s than its dependence on the numeric keypad." Perhaps future products like Steinberg's in-development notation software, or even future editions of Finale and Sibelius will fulfill this prophecy, but for now, the efficient use of music notation desktop software products relies heavily upon the numeric keypad.

The many keypad layouts of Sibelius
Construction and use of the NewerTech wireless keypad
Several offerings have tried to fill the void for a perfect wireless solution, either through hardware, or apps like the $5 NumPad for iOS, which even comes preloaded with Finale and Sibelius layouts. But no one has come closer than NewerTech, which just last week released its $50 Wireless Aluminum Keypad, available from Other World Computing. 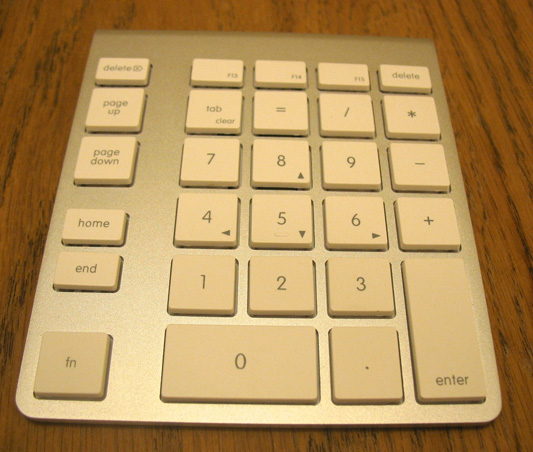 NewerTech's Wireless Aluminum Keypad
Unabashedly described as "the keypad that looks and feels like the Apple Keyboard you already love," it fulfills that promise. Even the most ardent Apple fan would be hard-pressed to identify the keypad as a non-Apple product. Everything from the brushed aluminum enclosure to the font on the keys on the NewerTech product matches up with Apple's products. Only upon very close inspection and regular use do subtle differences become apparent: on the NewerTech keypad, the keys are raised ever so slightly more, leading to a miniscule difference in the keypress action compared to Apple's keyboard; and the keys themselves are just barely more rectangular on the NewerTech product than are the more rounded corners of the Apple one.

But it's as close a match as one will find. The NewerTech keypad even comes with a plastic bracket to attach to an Apple wireless keyboard or trackpad. The bracket I received worked well, but left a slight gap that was partially remedied by a couple of adhesive strips that are included with the keypad, designed to make the fit more secure.

The keypad itself is powered by two AAA batteries that are included. Inserting them is the same as replacing the batteries on an Apple keyboard. OWC has produced one of their customary helpful setup videos, but it comes with an important caveat: the demonstration shows and describes inserting the batteries in the incorrect direction. I followed the video's instructions, and the unit and batteries became very warm, very quickly. Had I not noticed it, it could have possibly caused damage. There is a diagram on the unit itself that is correct, so be sure to follow that as a guide. OWC says that they will edit their video to correct the error.

The keypad pairs easily with a computer using Bluetooth, so no USB ports are sacrificed, which is not the case with another wireless keyboard that I otherwise enjoy using, the Logitech K750 wireless solar keyboard. NewerTech says that the Bluetooth range of their keypad is 30 feet.

The keypad gripped firmly to my wood desk, and in several days of heavy use with Sibelius and Finale, it performed well. In addition to the numbers and arithmetic keys, NewerTech's engineers wisely included some other keys that are missing from the compact Apple keyboard: F13, F14 and F15; a forward Delete; and Page Up, Page Down, Home and End. An extra backwards Delete key and an extra Fn key are also included. 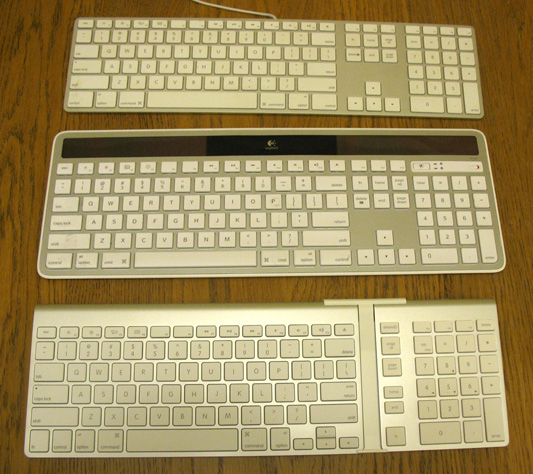 A tale of three (and a half) keyboards: Apple's full-size wired version; Logitech's wireless solar-powered model; and an Apple wireless keyboard attached to NewerTech's numeric keypad
The NewerTech product is the perfect complement to the Apple Keyboard. Designed, as it was, more for accountants than musicians, however, there were a few issues of which users of Sibelius and Finale need to be aware (and can be remedied by reading on): Fortunately, the remedy for all three of these shortcomings is to install the free keymapping utility Karabiner, from Takayama Fumihiko (PQRS.org). Although the forthcoming instructions seem technical, they are really very easy to follow, and in the end you'll be able to fully use the NewerTech keyboard with Sibelius and Finale.

Go to the Karabiner product page, and download and install it according to the instructions.

Launch Karabiner and follow the directions for initial setup, making sure to allow Karabiner to access the Mac's accessibility features.

Open the custom settings document by clicking on the Misc & Uninstall tab, and click the "Open private.xml" button. This will open the Finder at the file's location on your computer, which is at ~/Library/Application Support/Karabiner:

On the Change Key tab in Karabiner's preferences, click the "ReloadXML" button:

If all goes well, your NewerTech keypad will now properly transmit the functions of Clear and Enter key to your Mac without needing to use the Fn key, and you'll also be able to use your modifier keys such as Command on your Apple wireless keyboard or MacBook in combination with the keys on the NewerTech keypad.

Despite the need to install the Karabiner key remapping utility to override the keypad's defaults, the NewerTech Wireless Aluminum Keypad is an excellent and long-overdue addition to the market, especially for laptop users for whom adding a full-size keyboard that takes up a USB port is unsatisfactory. At $50, desktop users with more options will have to weigh its pros and cons against getting a full-size Apple wired keyboard at the same price, or another option like the $60 Logitech full-size wireless model.

You could also do as my friend Doug LeBow suggests: Keep a full-size primary keyboard with an attached numeric keypad, but place the additional numeric keypad on the left-hand side of your computer keyboard. If you do a lot of step-time MIDI input with your right hand on a MIDI piano, this may well be the best of all possible uses for NewerTech's numeric keypad.
The above article has been included on our site for archival purposes only.
To see the article as it appeared in the original published form, click the link provided.
All stories have been captured without modification to their content.