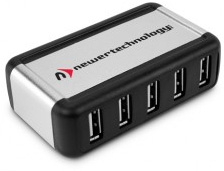 Packaging
The Newer Technology 7-Port USB Hub comes in a molded blister-pack, but fear not because it features an easy-open tab to access the device without cutting your fingers or blaring obscenities. It’s not the sexiest packaging, but for such a utilitarian peripheral, Newer Technology gets a pass.

Build
Where Newer Technology gets a pass on packaging, no such slack can be given for build. Whether you take the hub with you in a bag or have it set up as a permanent fixture on your desk, build quality is important. With a brushed aluminum body and molded rubberized plastic on the sides, the build of this USB hub is definitely where Newer Technology put the bulk of their effort. The only negative is that the aluminum got scratched in the same pocket of my laptop bag that contained the AC adapter. I purposely stowed them together to see how well they play together but it looks like they’re better kept apart. The hub includes a stand to keep it sturdy and stable when stood vertically, and didn’t tip when swapping devices and ports. A rubber ring around the bottom the vertical base would have prevented sliding and would have been a nice touch. The kit comes with the required USB-B to USB-A cable which connects it to your computer, as well as the AC adapter with the brick on the plug. Five ports are found on one side, and the other has a labelled 2.1 Amp port as well as a Sync port bringing the total to seven.

Performance
This powered USB hub is the best I have personally used. Where many (or most) USB hubs have sporadic disconnect or discoverability issues, the Newer Technology hub had zero issues in dozens of tests on Mac and PC platforms. Tests were done hot-swapping a scanner, printer, iPhone, iPad, Kindle, PlayStation Vita, and USB-powered external hard drive. The only variance in performance came with the iPad, which requires connection to the 2.1 Amp port on the hub. Any other hub gives it a power warning on the device but does allow for synching with iTunes. Since this is more an issue with the power-hungry iPad and not the device, one could hardly fault the hub.

Style
Style isn’t everything, but it is something when talking about something you’ll line up next to your laptop or desktop setup. The brushed aluminum is a nice touch and the labeling and port areas are simple and sleek, but the Newer Technology logo takes an entire side of the device and is obscured no matter which side you apply the base. Again, these are purely aesthetical criticisms but many people consider style when making a purchase.

Value
The Newer Technology 7-Port USB Hub has an MSRP of $27.95, and considering the quality of the performance and the cost of similar devices, this is a great price. A quick look around found a half-dozen comparable hubs with none less than $39 MSRP, which is about where I would expect this one from Newer Technology.