iPads are inherently portable devices; thin and light, they allow users to get work done and consume content almost anywhere. But iPads are also very useful in more stationary setups. Apps enable users to use the iPad as a secondary display for their Mac or PC, and the wide variety of iOS applications can make the iPad a great desktop companion for keeping tabs on email, weather, stocks, or virtually any other bit of information.

It is toward this second usage scenario that Other World Computing has targeted the NewerTech NuGard GripStand and GripBase, a bundle of two products that offer users the option to "dock" their iPad in an elevated stand at their desk, while also having the flexibility to take the device on the road. We've spent the last week using the GripStand/GripBase bundle with our iPad mini. Here are our thoughts on the experience.

OVERVIEW
As we mentioned above, the "bundle" consists of two separate products: the NuGuard GripStand mini and the NuGuard GripBase. They come individually packaged with little assembly required. The GripStand mini consists of a clear plastic shell that snaps on to the iPad and a removable stand that can twist and fold to prop the iPad up at almost any angle. The stand attaches to the case via tension clips that snap into a circular opening in the back.

The GripBase includes a solid circular base and a vertical stand that will hold the iPad. Users need only to attach the stand to the base via a single included universal screw. Once assembled, the stand can swivel a full 360 degrees in the base. At the top of the stand is another connector identical to the one found on the GripStand. With the iPad in the clear plastic case, simply line up the connector with the hole on the back of the case, pinch the tension clips, and snap it into place.

With the iPad mounted to the GripBase, a combination of rotational and height adjustments allow the user to position the iPad in almost any configuration. An opening on the back the of the base allows for easy routing of charging or headphone cables, and all buttons and switches are accessible via gaps in the plastic case. Camera, speaker, and microphone areas are also unobstructed.

USAGE
We set up our iPad mini next to our MacBook Pro and started work as usual. Even though our iPads are often on the desk while we work, they are rarely used and usually just sit there charging. Putting one of the iPad minis in the GripBase changed our perspective, however, and we quickly found that we were using the iPad to check email, browse our calendar while making appointments on the phone, and even to watch videos from our Plex media server during breaks.

We found that we preferred a landscape orientation, which worked well for most applications, but we could also easily rotate the iPad into portrait mode when necessary. The base is solid and heavy, and there was never any indication that the iPad would lose balance and tip over, no matter how hard we tapped on the device's screen. 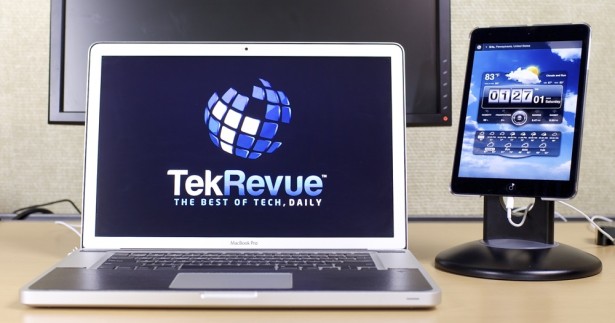 Another feature we appreciated was the slight resistance on the swivel motion. The iPad in the GripBase can be easily swiveled, but there's enough resistance so that the device won't inadvertently move if you're tapping on the sides of the screen, even in landscape mode.

When it was time to take the iPad with us, we simply pinched the connectors on the back of the GripBase to remove the iPad and its plastic case, grabbed the stand included with the GripStand, and snapped it on. While the iPad with the GripStand is easy to carry by holding the foldable stand (indeed, Other World Computing advertises that you can hold it "like a briefcase") it is not our favorite case. The stand adds quite a bit of thickness to the overall dimensions of the iPad, and it easily snags on items in your bag, even when completely folded up. Still, once you reach your destination, the GripStand can position the iPad in a variety of angles.

While we preferred the experience without one, the GripStand and GripBase can also fully accommodate an Apple SmartCover. The plastic case leaves the left side of the iPad open, allowing the SmartCover's magnetic clip to attach to the device.

CONCLUSIONS
An overall assessment of this bundle is a tricky thing to provide. Even though the GripBase requires the case provided by the GripStand, these are really two separate products. That said, we absolutely love the GripBase. Having an iPad elevated and accessible right next to our Mac opened up a whole new world of usage scenarios for us.

Although OS X offers great productivity options, such as Mission Control, we found it easier to have things like email and calendars open on the iPad instead of switching away from our active window on the Mac. It was also nice to be able to check the weather, look at our server status, and even play movies and games. The GripBase is solid, functional, and a great value compared to most other options.

From our perspective, the GripStand was not as exciting. While the built-in stand is very useful, and it can indeed be easy to carry while gripped by the stand's circular "handle," we didn't like the added thickness and awkward shape of the iPad while in this configuration. If you're interested in the GripBase, but think you'll only need to take your iPad on the go occasionally, the GripStand is definitely the way to go so as to avoid having to pry the iPad out of the plastic case before putting it in another more portable case. But judged on its own, the GripStand is the weaker half of this bundle. In summary, the GripBase is one of the best desktop stands for the iPad overall and, with comparable stands from other manufacturers costing up to $70 or $80, it is almost certainly the best value. While the GripStand is not our favorite case, its necessary inclusion in the bundle can be considered a "bonus," and some users may even prefer the grippy handle design over more traditional cases.

The NewerTech NuGuard GripStand and GripBase bundle is available now from Other World Computing for $39.00. While our review covered the iPad mini version, additional models for the first-generation iPad, iPad 2 and third- and fourth-generation iPads are also available. 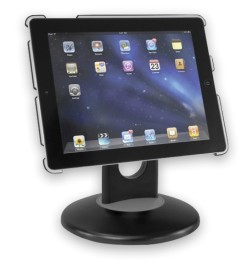 GripStand mini & GripBase Bundle Manufacturer: NewerTech (OWC) Model: PADNUGGSBMB Price: $39.00 Requirements: iPad mini (1st Gen)
The above article has been included on our site for archival purposes only.
To see the article as it appeared in the original published form, click the link provided.
All stories have been captured without modification to their content.