iDevices are expensive, relatively fragile, and highly portable, a mix that often results in heartache and tears as owners scrape the remains of their go-to mobile device from the pavement. Unsurprisingly, many companies sought to address this reality with the creation of ultra-protective, tough cases that claim to keep our precious devices safe from all manner of physical trauma.

Some companies, such as OtterBox, take this mission to the extreme. They provide incredibly durable cases that do indeed protect iPhones and iPads, but also add a significant amount of thickness and weight to the products. Further, these case styles often completely enclose the device, making the removal of the case for any reason a bit of a chore (as a former Apple Retail Genius, I hated to see customers approach the Genius Bar with an iPhone in an OtterBox case because I knew I’d have to spend the next five minutes prying the phone out of it).

Other companies take a more balanced approach by offering cases with increased protection that don’t add significant heft and are easy to remove when needed. One such company is NewerTech, the in-house brand of longtime Apple accessory firm Other World Computing (OWC). Earlier this year, OWC launched the NewerTech NuGuard KX case for the iPhone, a product that was met with favorable reviews. It featured a slick design that protected the enclosed iPhone with a layer of “X-Orbing” gel that provided cushioning during drops and impacts.

The NewerTech KX Series seeks a compromise between form and function.

OtterBox cases are very protective, but huge.
Now OWC is set to bring the same technology and design to the iPad mini. We were sent a sample NuGuard KX for iPad mini case and, after spending about a week with it, we’ve got some hands-on impressions to share.

Design
The NuGuard KX for the iPad mini shares a very similar design to that of its iPhone-targeted sibling. Its single piece construction features a soft but grippy rubber exterior combined with the padded “X-Orbing” gel interior. The entire case itself is quite flexible, giving it the capability to absorb as much of an impact’s force as possible. 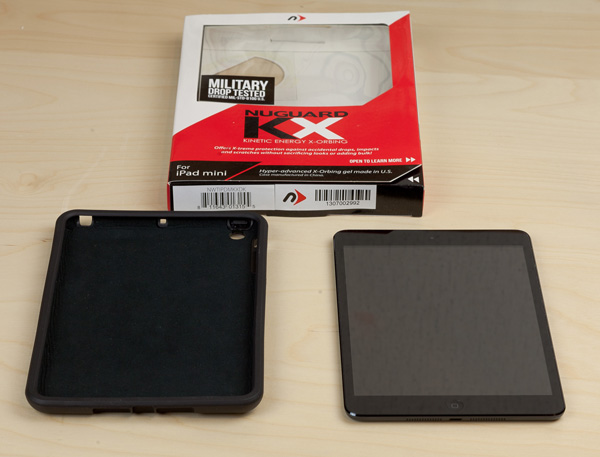 Around the edges of the case are access points and buttons for all of the iPad mini’s control and input features. The headphone jack, microphone, rotation switch, camera, speakers, and Lightning connector port are all accessible via the provided gaps in the case, while the lock and volume switches have built-in buttons that physically pass a user’s press through to the iPad’s button beneath it.

The back of the case features an attractive modern pattern along with the NuGuard KX logo. The design pattern goes beyond looks, however, and is textured to provide an extra bit of grip when holding it. 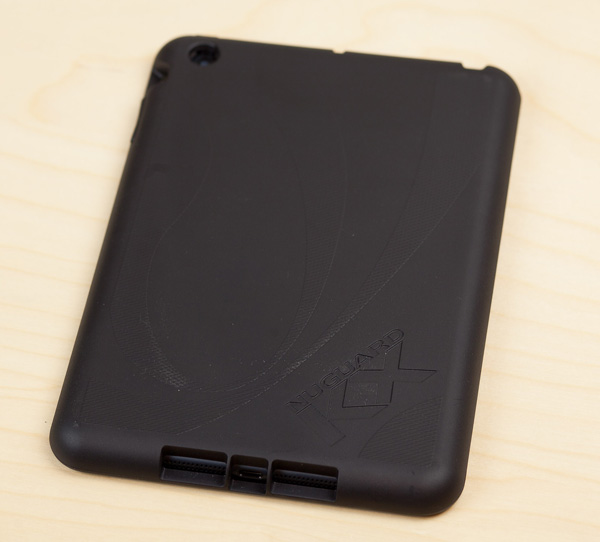 Usage
Installing (and removing) an iPad mini from the NuGuard KX is a snap, literally. Simply insert one corner of the iPad into the corresponding corner of the NuGuard KX and then press down on the remaining corners. Tension holds the iPad securely in place. When it’s time to remove it, just pry back one corner until the iPad is exposed and then pop out the remaining corners. It’s a design that should be familiar to most iDevice owners who’ve ever used a third-party case and it lets you insert and remove the iPad mini in just a few seconds.

Once the iPad mini is inserted into the case, you’ll notice that the NuGuard KX, at just 8 ounces, doesn’t add noticeable weight. It does add a bit of thickness to the iPad mini, but far less than many other cases advertising a similar level of protection. In fact, we sometimes find that the iPad mini is a little too thin; difficult to hold and easy to drop. With the NuGuard KX, we felt that the iPad was much easier to hold. The little bit of extra thickness and the grippy back made all the difference. 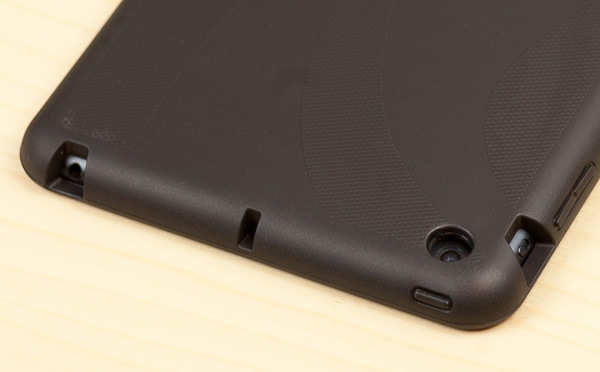 While using the iPad mini day-to-day in the NuGuard KX, we didn’t encounter any significant usability issues. The camera hole didn’t obstruct picture and video taking and the speakers sounded the same as they did without a case. The rotation lock switch was accessible, although those with large fingers may have a bit of difficulty reaching it in its recessed state. Also, the built-in passthrough buttons for the lock and volume do work, but you have to hit them from a more direct, perpendicular angle. Pressing them from an angle, as you may be able to do with the iPad’s native buttons, doesn’t always produce a response from the device. In other words, hitting the iPad’s switches and buttons without a case is definitely easier, but the experience with the NuGuard KX is satisfactory considering the benefits the case provides.

Protection
OWC has several videos demonstrating the protection offered by the NuGuard KX, as well as the capabilities of the X-Orbing gel. The company advertises that the testing performed on the NuGuard KX meets military standard requirements (MIL-STD–810G).

We didn’t have a large flight of concrete stairs to test with, but we did perform a series of drop tests from a height of about five feet onto a hard wood table.

Our iPad mini survived all of the tests without a scratch. Based on our testing and the testing done by OWC, we’re confident that our iPad mini would survive most drops we’re likely to encounter in our day-to-day travel.

One area of concern, however, is the display. The NuGuard KX does not provide full protection for the iPad’s display, something that some of the more bulky cases do. This omission was a necessary tradeoff for the reduced thickness and weight of the case. Instead of a full display cover, the NuGuard KX has a notable rise around the edge of the iPad’s screen. 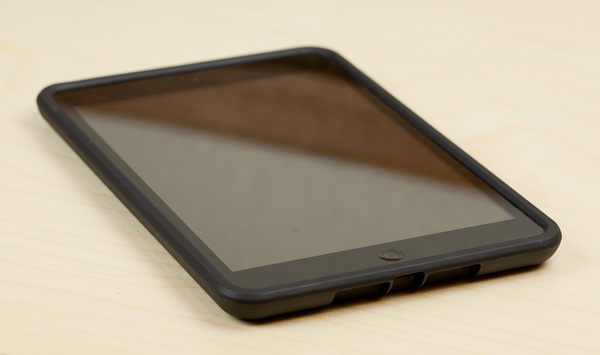 This rise, or lip, keeps the iPad’s display off of the surface when resting face down. This should provide adequate protection for most common scenarios in which the iPad is dropped onto a flat surface, such as a concrete floor or asphalt parking lot. If the ground is uneven, however, such as a rocky path while hiking, it is indeed possible for a protruding rock or other object to strike and damage the screen. Potential buyers will have to weigh the benefits of a case like the NuGuard KX against their likely scenarios for accidental drops.

Interested buyers concerned about scratches could also pair the NuGuard KX with any one of a number of film-like screen protectors, which are fully compatible with the NuGuard’s design.

Test drops aside, the case kept our iPad mini protected from all other dangers during our testing and the case itself, although dirtied thanks to its textured surface, held up nicely and is easy to clean with a simple damp cloth. It Comes In Black

While we wouldn’t recommend that those looking for bright designs avoid the case entirely, if color is truly a top priority, you likely won’t be happy with the current option for the iPad mini. 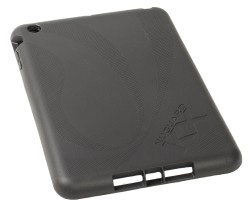 We have to admit that, even though we watched the OWC drop videos repeatedly beforehand, we were nervous about performing our own drop tests with our personal hardware. When you first unpack the NuGuard KX and see and feel it in person, it’s hard to believe that such a relatively thin and light case can provide as much protection as the company claims. But after doing our own tests, we’re believers.

The case not only protected our iPad mini, but also made it easier to hold. While the screen remains unprotected from direct strikes, it’s comforting to know that our iPad will be protected from the most common drops and falls.

The buttons and switches weren’t as easy to operate compared to a naked iPad, and we wish that the case was available in more colors, but these are minor flaws to an overall excellent case. If you have an iPad mini (or any iDevice), you should definitely consider a case, and we have yet to see another case for the mini that offered a strong level of protection in a thin and light package. At $40, it’s a wise investment to protect your $329+ device.

The NewerTech NuGuard KX for iPad mini is available today from OWC for $39.99. It carries a full 30-day return policy and a lifetime replacement warranty. 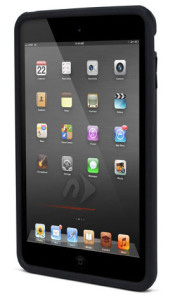 NuGuard KX for iPad mini
Manufacturer: NewerTech
Model: IPDMKXDK
Compatibility: First Generation iPad mini
Release Date: July 2013
The above article has been included on our site for archival purposes only.
To see the article as it appeared in the original published form, click the link provided.
All stories have been captured without modification to their content.