The NuScribe stylus is a slim, ballpoint pen lookalike. It has a traditional black ballpoint on the slender end and a rubber stylus at the top, next to the pocket clip. It's designed to look good, but best of all, it's extraordinarily inexpensive at US$9.00*

Styluses are fascinating to review because the developers design values are so obvious. Some believe in something small, like a stubby golf score pencil, that can be easily transported. Some design a pure stylus: 100 percent stylus and nothing else. Others like the idea of a simulated ballpoint pen and, of those, some may actually be a ballpoint pen and stylus hybrid.

Pricing is all over the map as well. It's remarkable that one can buy a good quality Bic ballpoint pen for pennies, but a half ounce of plastic or aluminum with a rubber nib can sell for $30 to $40. Of course, ballpoints are sold by the millions and styluses are low volume and a bit more high tech. Still... 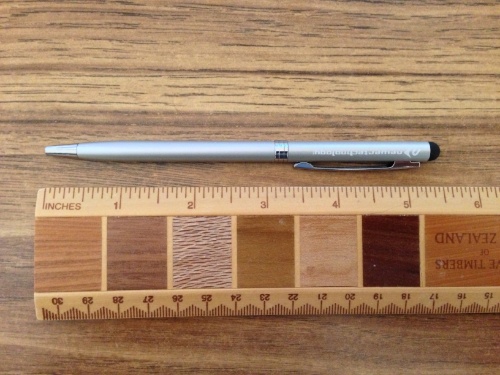 The NuScribe is most similar to the Kensington Virtuoso Stylus and Pen, but with a key difference. The Virtuoso is shorter, by 8 mm or so, fatter and higher priced at $29.99. It also has a bit more heft and is almost 12 mm in diameter.

For those women, like my wife, who like to use a strategic theft deterrent in the office, the NuScribe also comes in pink -- a color most guys won't help themselves to. And if they do, they're easy to track down.

Personally, I don't like short, stubby pens or styluses, and I think that the NuScribe is nicely designed. The length, balance and slender design feels good, but the small diameter may not be for everyone, especially men with large hands. 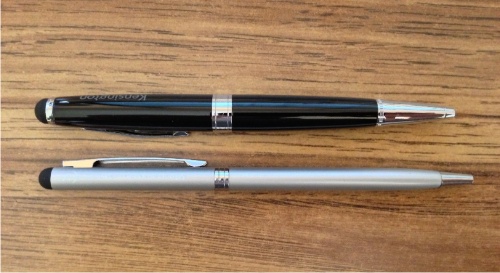 What's important here is the price. While the NuScribe comes with a full one year warranty and has a replaceable pen insert, its price is only $9.00. I've handled the NuScribe for the long holiday weekend, every day, and I can say that it is sturdy, well made, and not at all cheap feeling. That combination of quality and price earns this stylus a high rating.

However, that may still annoy those who use it frequently for drawing. So I would say that if you're primarily interested in a handsome pen that can work as a stylus, this is for you. But if you are an artist or going to spend long periods of time on a tablet then a pure stylus will be a better choice.

The absent minded who use several styluses will have to take care that they remember which end is the rubber nib lest they accidentally touch the pen side to their iPhone or iPad.

Also, like many styluses, the pocket clip is crimped on. That's not as well crafted as, say, the Wacom Bamboo's technical design, but then this is a $9 stylus.

The package is a slender piece of cardboard and plastic cover, perfectly acceptable for a $9 stylus. On the back is a list of features, specifications and serial number. It would be convenient to file that. 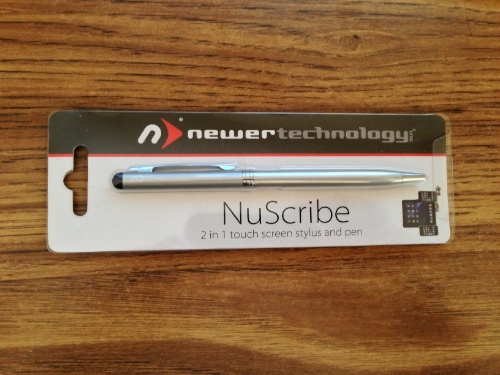 The warranty is one year. Obviously, it doen't cover the ink in the pen ( a consumable). Newer Technology told me that the rubber nib should last longer than a year, but would be replaced under warranty based on an assessment. Outright failure would be covered, but obvious abuse, like chew marks would be rejected.

Did I mention the $9 price? This stylus has the best performance to price ratio of any stylus I've reviewed. You can feel comfortable buying two of them for starters if 1) You like a slender stylus, and 2) you only need it occasionally and want to have a 2-in-1 combination pen/stylus, and 3) don't mind the pocket clip on the stylus end.

It's a handsome pen and perfect for the businessman. It will probably attract some favorable attention. Based on the feel and construction, it would appear to last as long as any stylus previously reviewed here.

* The priced was reduced for the holidays, and is still in effect. The price may go back up to $19.99, but no date has been specified by OWC. Also, the referenced OWC page is slightly confusing. If you also buy any of the qualifying products listed, you get a $9.00 rebate, making the NuScribe essentially free. That offer lasts until 18 Jul 2013.

Slender, 2-in-1 design stylus and ballpoint (Cross refills). Made of metal, comes in aluminum or pink colors. Well made. One year warranty. Great sale pricing.

Nib is on the pocket clip end; that might annoy some. Pocket clip crimped on.